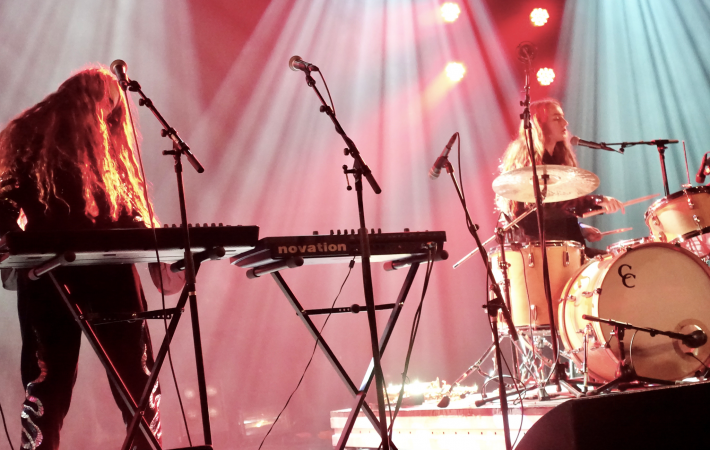 Saturday we started off with a walk to Bryggjan Brugghús, a microbrewery with restaurant where a showcase of Icelandic artists took place.

When we arrived, Hildur was on and showed why the Nordic approach to pop music is so appealing: there is always some restraint and melancholy woven in that keeps it off the bubblegum territory.

Hip Hop is big in Iceland and Emmsjé Gauti demonstrated again that the language works well with the beats. We understood only the English swearwords, but that made the show not less enjoyable. Again there were lots of kids in attendance, which may be a hint why so many Icelandians become musicians.

Next up was Milkywhale, which is a dance as much as a music project. Melkorka Sigríður Magnúsdóttir bounces around the stage and encourages the audience to do the same.

Back in town at our now official favorite (off-)venue Loft we saw the must see act East of my Youth, the duo of Herdís Stefánsdóttir and Thelma Marín Jónsdóttir. They turned issues with their complex setup into an entertaining intro where Thelma told stories and showed off her shiny new sampler. Then we had the pleasure to listen to their single “Mother” (a glamglare song pick) with the actual mother in attendance. The EP is out in two weeks – more here on glamglare.

At this point we had to split forces: I stayed for Canadian dark pop five-piece Doomsquad while Elke went over to BarAnanas for Fufanu (more on this per Elke’s words awesome show later, separately). Doomsquad carry a boat load of instruments on stage to unleash a hell of a spectacle: at some point the percussionist jumped off the stage, where she yelled swearwords into the audience (we met her at SXSW – in real life she is lovely).

They were followed by Australian singer/songwriter Alex Cameron, who travels the world accompanied by saxophone player Roy. Most of the music comes from an iPad, but he makes up for it by telling bizarre stories between the songs. Also, he wears a velvet suit on stage.

The vibe at Loft was too good to leave: suddenly I found myself surrounded by members of my two favorite festival bands Warpaint and Dream Wife. Only at Airwaves!

If you are living in fear that women will take over the music industry rather sooner than later, Airwaves is not for you. At Harpa we saw another case in point: Let’s Eat Grandma are two British teenagers who don’t care about following any established genre rules. Rosa and Jenny play an array of instruments in addition to the electronic core of their music: less to show off musicianship, but rather because they can do whatever they set their minds on.

Meanwhile at Gamla Bíó Kate Tempest finished her show and hundreds of people streamed out of the building. With the American fear of liabilities in mind, this looked like a recipe for disaster, but it all worked out well.

Icelandic supergroup Gangly was on next. If you are asked for the voice of Iceland and you don’t want to be obvious, Jófríður Ákadóttir is a good answer. Aside from Gangly, she sings in a bunch of other bands, including the internationally known Samaris. No wonder as her voice has a certain icy sparkle that can turn any song into an experience.

Chinah from Denmark were closing out our night (the festival went on to the wee hours). They were on our must see list already at SXSW this year, but they had to pull out. Beautiful music, great show – the right stuff to have in the ear for a few hours of sleep.