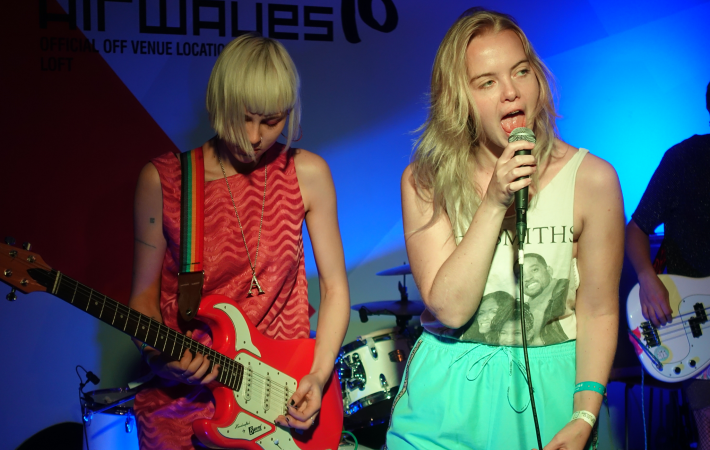 On day 3 we could finally take advantage of the “off venue” shows, which are free for all and take place in various shops, restaurants and hostels around town. Since those locations are smaller and feature often only makeshift stages, the shows are more intimate and you have a good chance to chat with the musicians.

But first we had to go to Harpa again for a chance to get tickets for PJ Harvey’s closing show on Sunday. Since we were late, we thought to be laughed off, but no: tickets were still available, even though some people waited since 8 am in the morning.

First show was Dream Wife once more at the Loft hostel. We were joined by a bunch of small kids who were in for a rock’n’roll lesson by Rakel, Alice and Bella. After the show we chatted with Rakel and are happy to report that they are planning to make SXSW in conjunction with a U.S. tour next spring.

A short but expensive cab ride brought us to the campus of the Reykjavik university, where a local bank sponsored a show of Icelandic artists, two of which we have featured on glamglare.

Audur does smooth new soul music backed by electronics and guitar. Soffia Björg plays together with a three-piece backing band Americana-leaning rock music. Both acts are on the verge to become known beyond their home country.

Back in town, we caught another bit of a Dreamwife show, this time at the large stage of Harpa Silfurberg. We stayed for Reykjavíkurdætur, a must see show at Airwaves. The “daughters of Reykjavik”, are a hip hop band, but nothing prepares you for seeing 14 women in designer dresses occupying the stage and start rapping. They rhyme in Icelandic but the feminist message was universal and they added enough English words to understand that a parental advisory was in order.

They were followed by Warpaint, a beacon for women in music themselves. They played a somewhat subdued show, but that didn’t bother the jam packed room.

Capping off the night for us were Fews at the Gaukurinn. They overcame sound problems to put on a show brimming of raw energy.

Meanwhile the main streets of Reykjavik have turned into a Friday night party area with music booming out of pubs and lines in front of night clubs.