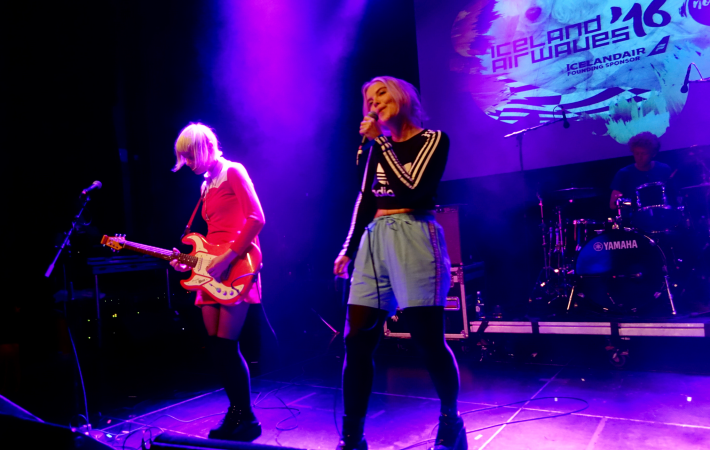 Airwaves is not your typical music festival, so why not starting the day off at one of the 25 wonders of the world? The Blue Lagoon is a natural pool fed by hot springs with healing powers. A couple of hours of relaxation time, because we were up for a fantastic line up in the evening.

Next up on the same stage was Dream Wife, a U.K./Icelandic three-piece. While name and lineup suggests some sort of semi-serious punk outfit, the three women (plus drummer) are up to something else: the fierce guitar-driven indie rock would be exciting even without their outstanding singer Rakel Mjöll, who is blessed with the ability to charm an entire room of people with a single smile.

After that we were heading over to Harpa which runs shows in four venues. This time it was packed with festival attendants and felt finally more rock’n’roll than classical music. At Silfurberg Icelandian band Singapore Sling was on. The six to seven piece band plays intense, loud alternative rock. Extra points for the backdrop: during the show a sculpture of a bull’s head grew invisibly from a tiny spot to a menacing monster.

The next band, Fufanu, topped Elke’s must see list, so the excitement was big when singer Kaktus Einarsson and guitarist Guðlaugur Einarsson took the stage backed by a bassist and a drummer. Kaktus made it official (after Dream Wife has proven it earlier that day): a dedicated singer rocks. His bad boy rock show fit perfectly to Fufanu’s dark alt rock and drove the crowd close to insanity.

And there was no winding down from here: Californian duo Go Dark’s heavy electronic beats left a packed Gaukurínn breathless. They brought life-sized neon colored figures to the stage for a weirded-out future hippie vibe.

And this was Day 2 in a nutshell.