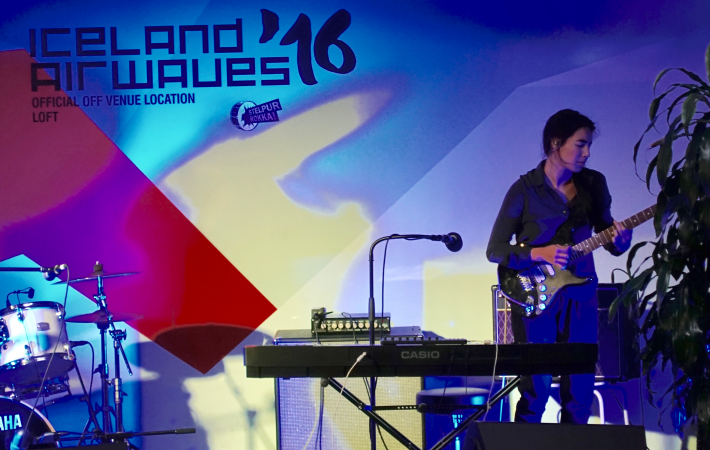 There was not much of a first impression of Iceland because it is pitch dark when the planes from the U.S. arrive at the Reykjavik Keflavik airport in the early morning. After checkout, it took another 50 minutes by bus to make it to the charming capital of Iceland. With not much sleep during the night, we were happy that we could move into our room early and take an intense two-hour power nap.

We needed it, because there is so much going on. Airwaves has two parts: the official one which requires a wristband for admission into one of the designated venues and a free “off-venue” part that takes place in shops, restaurants, and youth hostels all over town. That’s a similar concept as SXSW, but while Austin’s downtown is pretty much consumed by the festival, you could easily overlook that Airwaves is taking place in Reykjavik, even at its epicenter, the fancy multi-level concert hall Harpa. That contributes to a much more relaxed vibe, where music is more important than a party.

For us, the first act we saw was German singer/producer/multiinstrumentalist Josin at the Loft Hostel. We couldn’t ask for a better start. For once, Josin’s beautifully intimate songs fit perfectly with what one would expect from an Icelandic music festival. And the hostel’s bar with people comfortably lounging on the floor.

After registration, we fought our way through the rain to Húrra. First up, Cryptochrome, an international group with a German making the beats plus Icelandic and English MCs. Fantastic stuff and a pick on our must-see list.

Einar Indra is a solo singer/producer, who got the crowd going with soulful electronica.

was followed by Gunnar Jónsson Collider who alternatives between ambient soundscapes and catchy pop songs together with a three-piece band.