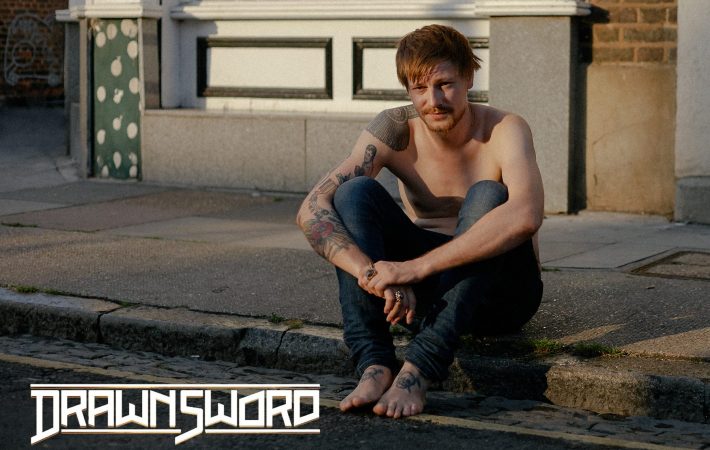 London-based artist DrawnSword creates music rooted in classic songwriting with a hip-hop edge and electronic textures. With “Ghost” DrawnSword releases his second EP and it is nothing short but stunningly beautiful! “Ghost” left me somewhat breathless and in awe after the initial listening and I am stoked that glamglare is exclusively premiering “Ghost” today.

DrawnSword builds on his craft demonstrated with his debut EP “Still Too Few” and delivers with his follow-up album a more refined work with tighter and funkier hip-hop, crisper electronic elements, more complex songwriting and an overall bigger production.

The rather irresistible “Mirrors” got released ahead of the 5-track EP and was inspired by DrawnSword’s bartending days about which he says: “I love going to clubs and bars or any public place with a high concentration of humans for that matter and just watch people, but there’s a certain honesty to it when they’re off their tits”.

“Mirrors” marks the opening track of “Ghost” and might well be the track that is instantly the most likable and alluring. Yet “Ghost” offers more of where this came from and should definitely be listened from the opener “Mirrors” to the closer “Just an episode”, a much darker and moodier track.

When asked what he was aiming for this time around, DrawnSword told me: “With this ep I’ve tried to be a lot more aware of what I was doing. From writing to recording into mixing. I’ve departed from trying to tap into my subconscious entirely, during the writing process. I’m much more confident in my abilities so I don’t have to hide behind improvisation anymore. I’m not accusing anybody else that uses improvisation of this crime but I certainly was guilty of it.”

Listen to “Ghost” and enjoy it in its entirety. You can get the EP also on Bandcamp and directly support the artist.

Watch the mesmerizing and sensual video for “Mirrors”, directed by Leif Johnson: