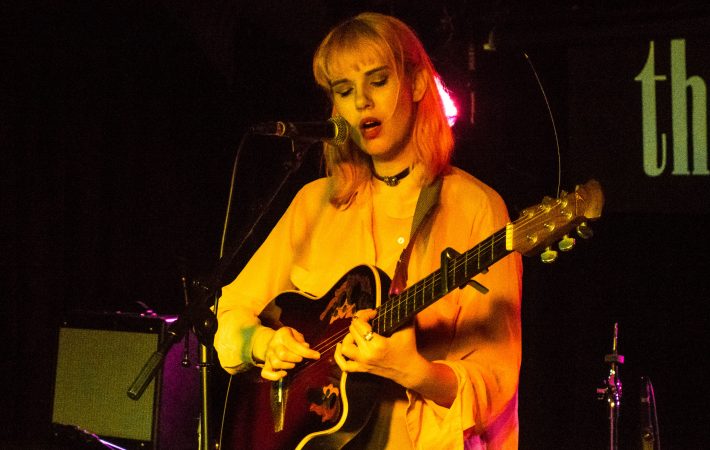 Where to begin… it’s difficult to pick only one favorite song from Ariah&‘s excellent self-titled debut EP. The collection of songs immediately drew me in, like snorkeling in Caribbean crystal turquoise waters, following a swarm of colorful fish, going deep, and deeper and realizing that you can only go that far with a snorkel. But it doesn’t matter because you can still see all the wonders underneath and the sun shining above, breaking through the surface painting beautiful patterns and letting everything glitter and shine…

Ariah&’s songwriting is bright, optimistic and alluring to a point where it’s hard to believe that songs can be that beautiful, with vocals so versatile and tender and yet at the same time so powerful that they leave you breathless. After having listened to Ariah&’s EP on repeat several times, I was more than curious what she would sound like live.

Luckily, there was an occasion and of course, Ariah& did not disappoint! Having been invited to play a last-minute set at The Delancey two weeks ago, still overcoming a nasty cold and a streak of not having played live, Ariah& sounded as lovely and wonderful as it can be. She played all by herself which gets extra kudos in my book.

Ariah& has a few shows coming up, playing together with a full band, and I highly suggest to come out to see Ariah& live before it’s no longer possible to see her up close and personal. Because… it will happen. Until then, enjoy photos from her set at The Delancey, listen to her EP in its entirety on SoundCloud here or get it on iTunes and listen to my maybe two favorite songs, the opener “No Gauge”, and the closing “Screaming Seasons” faintly reminiscent of The Church, yes.

Nope, it’s not a mandolin but Ariah&’s guitar, just played a bit like a mandolin and it sounds just… amazing:

Now to something different, listen to the utterly gorgeous “Screaming Seas”: