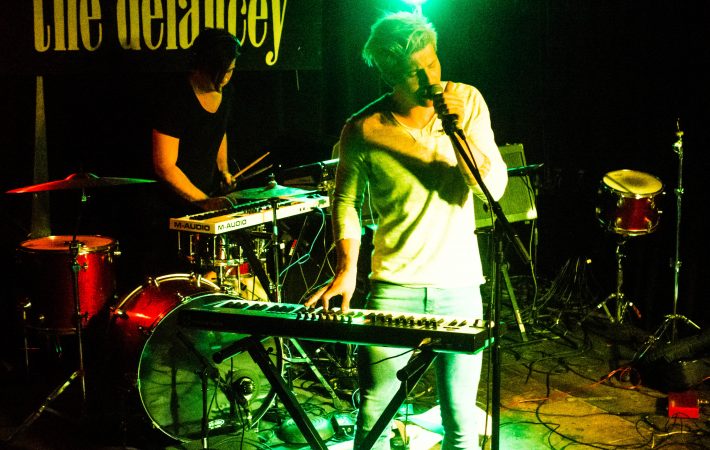 Everybody who came out last Saturday to the Lower East Side’s swanky The Delancey was part of a celebratory evening filled with great indie-rock. The event was close to being sold-out and we could not be happier with the outcome. Here are some visual impressions plus Soundcloud tracks from a fantastic concert night!

New York three-piece Def.GRLS were playing fan favorites and several new songs alike. They delighted with their fun glitter surf rock and got the party truly started! While we are long time fans, we especially loved the new material and are looking forward to hearing it recorded as well.

Get a taste of Def.GRLS and listen to one of their classics – “FinGRLess Lady”:

Next up was Aussie born and Nashville-based Quinn Lewis who played a New York City stage for the very first time. Of course, we liked his soulful electro-pop already, that’s the reason why we invited him in the first place, but had now idea what he would look and sound like live.

Boy, were we in for a treat! Together with his band mate Danen Reed (drums, keys, guitar), Quinn Lewis proved that he is a young artist to watch out for. This was definitely fantastic and we can’t wait to see Quinn Lewis in New York again!

While we still have Quinn Lewis’ irresistible “Rooftop” in our ears, listen to his newest single, the ultra-cool “Bridges”:

Two weeks earlier, we could already get a taste for what The Lulls sound live, when they played The Bowery Electric during Mondo.NYC (review here).

The Lulls are lively performers and it’s particularly enjoyable to see Rutger and Cameron both taking the mic, which makes for a characteristic sound. On tour, the three are supported by Max Idas (synths) and who knows, maybe they will continue as four? With a tour stop in Toronto scheduled for the next day already, the vinyl release party could not get too wild but here’s to seeing The Lulls again soon!

… and with so much party already, what’s missing is someone who can crank up the good vibes even further, and that is what Ryal did. Jacque Ryal came out with her entire band for the event and we could enjoy their infectious disco-pop to the fullest. Great times!

Listen to “Wish” to get the idea:

Four bands and four hours later, the glamglare showcase came to an end but with so much great music all around, friends and fans left on a high-note.  Big THANKS to all who came out and especially to Def.GRLS, Quinn Lewis, The Lulls and Ryal. We love you!