Q&A with The Eiffels 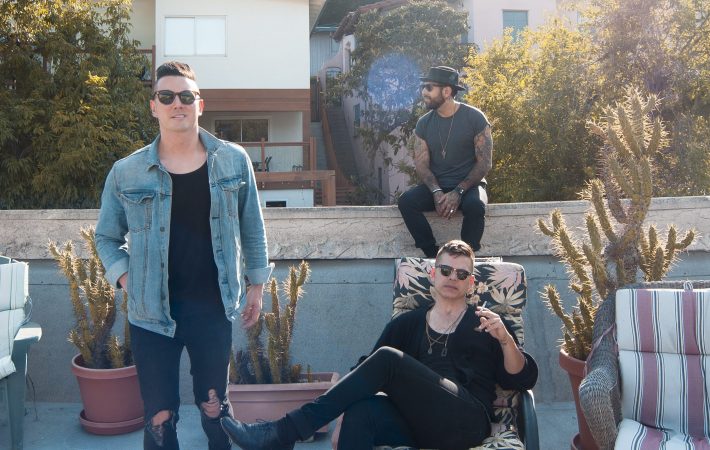 Q&A with The Eiffels

Ever since I listened to The Eiffels self-titled EP early summer 2015, I was hooked and their songs are a constant and highly welcomed staple in my music rotation. With catchy song titles like “I’m Ready”, “More”, “City All Night” and “I Did It Now” to go with irresistible and passionate high-energy synth-rock, what’s not to love? Listen to “I’m Ready” to maybe get a better feel for what this is about:

As a three-piece comprised of Sean Ulbs (vocals, guitar), Lee Marciniak (drums) and Jade Michael (synths, guitar), I featured The Eiffels in my #3IsABand series and of course, I wanted to know more about the band than what I could read online, for example that “City All Night” got airplay in the U.K. TV show “The Only Way Is Essex” or that the new single “You Got Me” is featured in an episode of MTV’s “Are You The One”.

So one day, consequently, I took heart and reached out to The Eiffels inquiring if they would be game to answer a few glamglare questions and much to my delight, Sean agreed to it. Since this is one of my favorite bands, I sent Sean a few questions extra, and he replied to them all. Thanks so much, Sean for providing your insights.

Let’s get right to it:

Where does your name The Eiffels come from?
We had hundreds of names written down when we were first getting started. “The Eiffel Shapes” was one of our favorite options. We ultimately decided shortening it to “The Eiffels” would make for a better name.

How would you describe your sound? Is “indie” cutting it?
I think “indie” is a good place to start, but that term definitely casts a large net. Some people have described us as “synth-rock.” I think that’s more specific and gives you a better idea of our sound.

What was the last song that got stuck in your head?
Mayer Hawthorne’s “Love Like That.” Jade recently asked me if I had heard it. Coincidentally, I had just added it to my playlist a couple days before. Very catchy song and begs to be sung along to.

Do you have a song from your childhood, one you always enjoy hearing again?
I still love hearing “Everybody Wants to Rule The World” like it’s a new song.

What was the first album you have ever bought? Digital, vinyl, CD or cassette tape?
I believe my first music purchase was from one of those old BMG “Buy 12 CDs For The Price Of 1” mail orders. I was excited to jump start my CD collection and got an eclectic mix of mostly top 40 rock, alternative, rap, and R&B.

Do you still possess these albums?
No, my parent’s house burned down years ago, so I don’t have much from my childhood anymore.

Is there a song you would like to cover?
We’ve had some fun covering Billy Idol’s “Dancing With Myself.” We’d like to add some Prince, Bowie, or Tears For Fears at some point in the future.

What is your songwriting process like? What comes first, rhythm, melody or lyrics?
We typically start with drums / rhythm, then melody, then lyrics.

Playing live, what has been your favorite venue so far? And why?
We just played the Bootleg Theater in Los Angeles again. The room’s a great size, the sound is excellent, and the crowd is filled with music lovers.

Where would you love to perform live one day?
We’re looking forward to playing bigger venues like The Wiltern, and The Fonda.

If you could have any musical instrument in the world, which one would it be and why?
That’s an interesting question. I would love to own one of Prince, or John Lennon’s old pianos, or guitars. Something like that. I think an instrument with a great story, or history behind can put you in a new place when playing it. The idea of some of that magic, or those ghosts, still being in there is an inspiring thought.

If I were to visit Los Angeles where would you take me to experience great live music?
The Echo, The Bootleg Theater, The Hi Hat, and It’s A School Night at Bardot are some of favorite smaller venues.

Again, big THANK YOU Sean, this was great fun.  With no The Eiffels concert being announced for New York City in the near future, I might have to make a trip to L.A. this winter, checking out these recommendations and hopefully see the trio live (must time it wisely!).

Luckily, for the time being, we can turn to YouTube for the rescue and hence watch the video to The Eiffels’ newest song “You Got Me”:

Find The Eiffels on iTunes and Spotify.