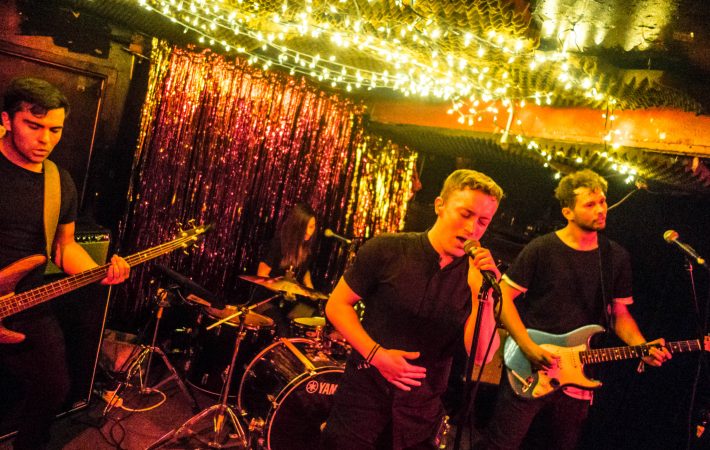 By now it should be clear to everybody: CMJ is not happening in 2016, after a continuous run for 35 years. But we have Mondo.NYC in its inaugural year in town, which may replace or complement CMJ. Who knows? Kudos to the organizers to pull off a major conference and festival in only a few months. The conference part seems to be top notch, the festival is maybe missing some big names. But here at glamglare, we don’t care and are happy to see new faces. More about this soon.

After a nice chat with members of Organized Scum the first band we saw live was Echoic from London at Cake Shop, an alternative power-rock four piece from London. As often, it pays off to have one member, Connor John Turner, on exclusive vocal duties: the show gets immediately an influx of extra energy. Cake Shop, a small basement venue at the Lower East Side of Manhattan, filled up quickly and something like festival atmosphere came up. Stay tuned for an interview with the members of Echoic.

At Pianos next door we chatted with Elle Exxe from Edinburgh, Scotland, who is bound to make a splash at Mondo. Unfortunately we couldn’t see her yet on stage, but she has a few more shows coming up during the next days.

Next up, The Lulls at The Bowery Electric. Originally from San Diego, California, they are spending a couple of weeks in NYC to work on new material. After seeing them live, we are even more delighted that they will have their vinyl release on the glamglare-presented showcase on October 1 at The Delancey. Also, check out their latest video for “Paris”.