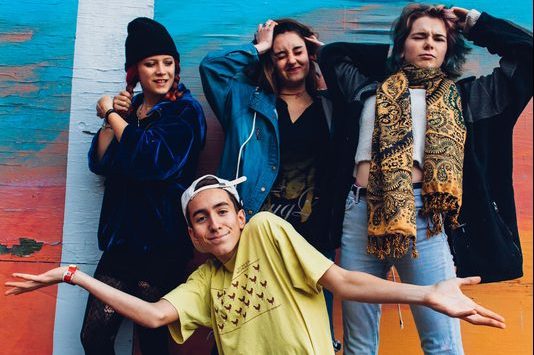 The Snaz are a joyful and simply super cool indie-rock band from Brattleboro, Vermont, comprised of Dharma Ramirez (vocals, guitar), Nina Cates (bass, vocals), Zack James (drums) and Mavis Eaton (keys, vocals). We are huge fans of the four-piece and saw them live in Austin, for SXSW 2015 and then again in New York, playing Rockwood Music Hall.

Much to our delight, Dharma and Mavis were game to answer our questions. Listen to “Brainwash Nation” to get into the mood of what The Snaz sound like and then read on:

What was the last song that got stuck in your head?
Dharma: A Perfect Day Elise – PJ Harvey. It’s been stuck in my head since the other night when I was blasting my iPod in the basement of the vegan cafe I work in while spreading flax crackers.
Mavis: Sexual Healing by Marvin Gay

Is there a song youd like to cover?
Mavis: Either Like a G-6 or My Sharona.
Dharma: Cat Claw – The Kills – It’s the perfect amount of screamy vocals without actually screaming.

What’s your songwriting process like? What comes first, melody or lyrics?
Dharma: As the person in the band who writes the lyrics and basic musical structure on guitar, I usually start with melody. I have to find something musically that fits the mood of what I want on guitar before putting lyrics to it. However, I often draw from my poetry book in which I scribble down thoughts all the time.

If you could have any musical instrument in the world, which one would it be and why?
Dharma:  I don’t even know. I’m so lame when it comes to gear, as long as it works ya know? I guess during recording I’ve always really enjoyed using Les Paul guitars.
Mavis: A Bass clarinet. I play the bass clarinet and it is a really amazing instrument but they are very hard to find, especially at a reasonable price

Playing live, what has been your favorite venue so far? And why?
Mavis: Maybe Radio Bean in Burlington Vermont. I just feel like I always have fun when we play there and it sounds good and I always feel like we deliver a really good show.
Dharma: Oh geeeeeeez. Hard question. Most of our college shows have been super fun. We played at Brandies university which was a riot, everyone was pretty out of it, including the band but nobody cared. The energy was there.

Whats the most bizarre thing to happen while you were onstage
Dharma: A like 5 year old kid ran up and grabbed my mic. He knocked down the stand as well. I didn’t really know how to handle the situation. I feel like your supposed to laugh it off and call it cute when a kid does that sort of thing, even though it wouldn’t have been acceptable for anyone else. In addition, our bar shows get pretty wild sometimes, drunk people are the funnest to play to. This one time, a guy kept calling out “ONE MORE SONG!”. We’d like just started our set, we had a lot more than one more song to play.
Mavis: I had a very drunk women come up on stage and try to get me to find our soundcloud for her in the middle of our set once.

Where would you love to perform live one day?
Mavis: I would really love to perform in the club room at pearl street. Its a cool spot
Dharma: A Big Festival like Pitchfork, or Osheaga (which I just attended). You’d get to meet so many other musicians gain new fans as well as play for old ones.

If I were to visit your home town Brattleboro in Vermont, where would you take me to see/hear great live music?
Mavis: HA HA HA. If we could even find a show that sounded alright I would count that as a victory. There are not a lot of options round here.
Dharma: HA. Bratts not the live music place everyone seems to think it is. If there was live music even happening while you were in town it would probably be a future collective show. They’re this funky art drop led by Jonas Fricke. Check him out. He puts on cool punk and acoustic/experimental shows from time to time.

If you could choose to live in a decade (music, style, etc.) which one would it be?
Dharma: Probably the 90’s. I’ve got that angst ya know?
Mavis: I dont think I can really know if any decade would be better then this one. A lot of my favorite music came out in the late 60s early 70s but theworld was pretty screwed up then, so I dont think Id really want to livein that time. The 1920s look super fun but in that time you could still die from nasty colds and untreated infections and stuff. So I think Im fine with right now.

Thank you so much, Dharma and Mavis, great insights. We certainly will find you playing a big festival soon. See you there!