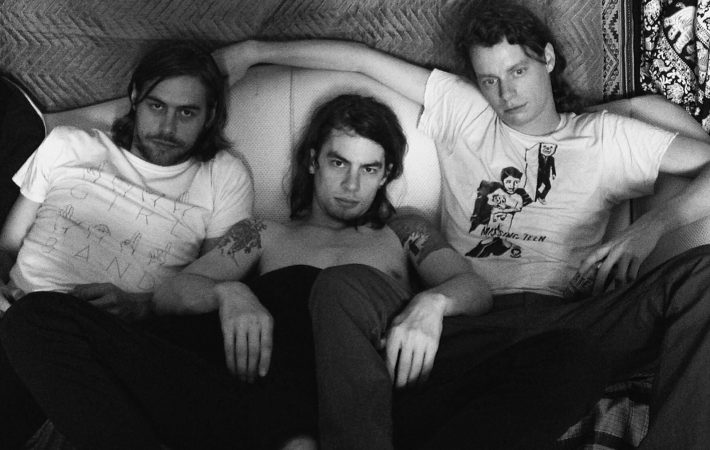 Most cool music discoveries have a story, some do not, yet others have a more personal one. The latter is true for FACIAL, a fascinating noise-rock trio from Los Angeles. When I first listened to their debut album “Mistress”, and then on repeat some more, I knew I wanted to write about the band. FACIAL, consisting of Sam, Cam and Jay are ideal for a 3 Is A Band feature! Having watched their truly creative, and certainly not out-of-the-box videos, browsed their webpage and social platforms, I braced myself for silence on their part when I reached out to the band. The more I was absolutely thrilled, to hear back from Cam and a fun and smart correspondence ensued.

Bottom line, it’s about the music and less who is behind it. I get that. Yet finding an audience, making the music discovery more accessible and the music being heard, does not completely go without writing about it, hence this feature. But… who better than the band itself knows how to describe their sound? “FACIAL makes the noise that cuts like a chainsaw through the thick buildup of residue in your mind, left behind by years of dealing with the dull banality of life.”

To get an even better, sonic idea, listen to “Rage Noir”, my maybe favorite track on “Mistress”:

Now that you got an idea what FACIAL sound like – there’s more though – stick around and read on what they have to say:

“FACIAL aren’t always making sense. In fact, they have been known to not make sense at all. It makes perfect sense considering the difficulty of true communication.  This is due to the subjective nature of reality, lack of attention due to mass distraction, and the fact that anything anybody does can be taken out of context and framed to be perceived in any which way you want! These are just a few factors, so imagine trying to boil down a live, complex organism, such as a band, to a concise couple of paragraphs, using words! what a difficult task!”

With a statement like that, it becomes apparent that there is more to FACIAL’s songs than one could possibly grasp with just a quick listen to it. The lyrics are challenging at times, and even if something seems obvious, there is another layer underneath that makes you think. And then there is the noisy, beautifully gritty post-punk sound – to slap a label on it! But I much rather end here, and let two more tracks/videos from “Mistress” feature the band some more.

Want to know more about the video? Get some insight on Owl Mag.

On a maybe lighter note is “Justin’s Tropical Shirt”. The video is super creative, again directed by Justin Bell, and the piercing guitar tune is just plain awesome!

For your Soundcloud playlist:

I can’t wait to see what Cam, Sam and Jay will look and sound like live. Luckily, they make a stop in New York but also play many other places. Check out the tour schedule and get your tickets soon because… they’re touring with Warpaint, who sell out venues quickly, often in the blink of an eye!