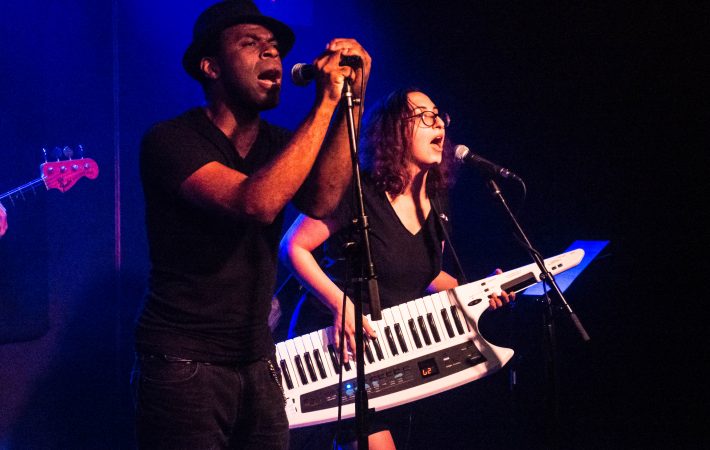 The maybe biggest accomplishment of Festival 8 on Sunday August 14 at Brooklyn’s C’mon Everybody, was its amazing diversity in performers and musical styles. Something even in New York you don’t experience often! Major kudos go to Kelsey Warren for organizing this festival and for performing with his band Blak Emoji that day. Kelsey – this was SPECTACULAR. (Sorry for shouting but I want to make sure you hear it. Incredible, truly!)

With nine acts on the bill, we managed to see six of them live, had the best of times and share here our impressions. A little late to the party, we missed Karolina Ros, had a quick bite during Revel in Dimes‘ set and this being a school night, had to forgo Justina Valentine too. There’s always a next time though, right?

Mishti, a singer/songwriter based in Westchester, New York played a wonderful mix of blues-rock, pop-rock and let her fantastic vocals shine over it.

Of Clocks and Clouds

Next up were Of Clocks and Clouds from Brooklyn, who recently expanded their duo set-up with a bass player and let us enjoy their psychedelic electro-rock as a three-piece. We’ve been following the duo for a while already and liked this new development a lot. Oh… Of Clocks and Clouds have just released their second album “Better Off” which every rock fan should give a listen to. Get it on iTunes.

Another three-piece, on stage at least, were Ryal based in New York. Jaque Ryal charmed us with her sensual and joyful alt-pop. Ryal’s self-titled EP is available on iTunes and has gotten airtime during the Olympics 2016 in Rio. Way to go Jaque!

Originating from Toronto, Canada and calling New York her home base now, Wolkoff enchanted with pretty vocals and an electronic, synth-pop setting.

A change of pace brought Kahli Abdu to the festival with his mesmerizing world-electro sound. He made us listen. This was exquisite.

This day was filled with beautiful performances and amazing music through and through yet everybody who came out to C’mon Everybody wanted to -of course- also see what Blak Emoji would sound like. This might come as no surprise but Blak Emoji will be one of the must-see-acts of fall 2016 (Irving Plaza September 8th) if electro-rock and alt-pop is your thing. The delivery is joyful and fun – something for soul and ears.

… impressions from a wonderful music and joy-filled day. This was A M A Z I N G. Can we do this again?