Q&A with Duke Of Wolves 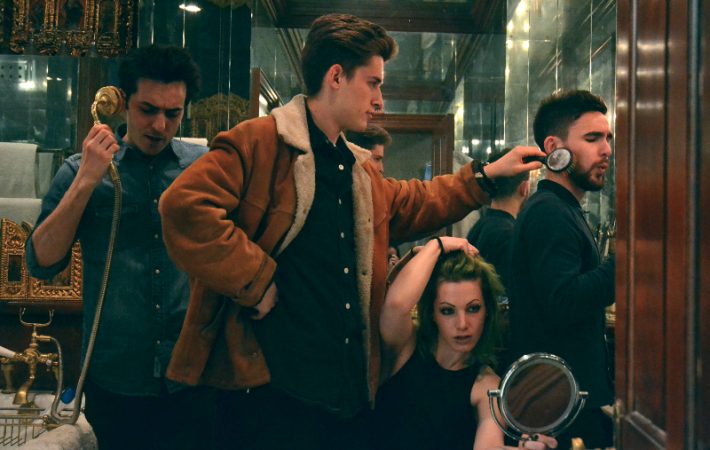 Q&A with Duke Of Wolves

Listening to Duke Of Wolves for the first time, I was immediately hooked! This is what the love child of MUSE and Queens of the Stone Age might sound like: big anthemic sound with irresistible melodies, powerful drum and guitar chops, topped off with amazing vocals all around. WHO is this band? To learn more about Duke Of Wolves, I touched base with Jim and we had just the most inspired email conversations and within a heartbeat, Jim was game to take part in our Q&A series. To set the mood, listen to the absolutely stunning “It’s Real” first:

Duke of Wolves are based in London and comprised of  Ben (drums, backing vocals), Jim (lead vocals, rhythm guitar), Orlando (lead guitar, backing vocals) and Sara (bass guitar, backing vocals). It is hard to believe that the four have been making music together only since January yet it comes as no surprise that they already played cool U.K. festivals with more to come in September because they are phenomenal!

Get a glimpse into the world of Duke Of Wolves and find out how Jim handles our questions:

Q: Super curious: what was the inspiration for your (totally cool) band name?
A: The truth is that we didn’t choose at all! We were all sitting in the pub deciding what name we needed when the Duke himself walked in, gave us his business card and ordered a bottle of scotch for the table. How could we say no?

Q: What was the last song that got stuck in your head?
A: I would have to say Feeder’s newest single ‘Universe Of Life’. That chorus is absolutely brilliant!

Q: What was the first album you have ever bought? Digital, vinyl, CD or cassette tape?
A: It was a cassette tape called ‘Blues Brother, Soul Sister’; a compilation of great music from the likes of Aretha Franklin, John Lee Hooker and loads more greats! I bought it when I was 6 I think.

Q: Do you still possess this album?
A: Sadly it has been lost in the dusty piles of time…in other words my parents’ loft…I believe you call it an attic over where you are! I still love all of those songs though. What a great introduction to music.

Q: Where would you love to perform live one day?
A: So many places! So hard to choose! Madison Sq Garden is one, but I’d prefer to go for something slightly more difficult to achieve…Let’s say a different planet! Yes, my answer is Mars.

Q: Is there a song you’d like to cover?
A: A friend of mine said that if he was a stripper, he would want to dance to Mississippi Queen by Mountain, so for that reason, and that reason alone I would want to make his dream come true…god bless your dancing little heart John.

Q: What’s your songwriting process like? What comes first, melody or lyrics?
A:It really varies each time. Sometimes I’ll be walking along and a melody will pop into my head, so I’ll run home (i have actually run before) and try to get it down, but at the same time, I could be taking to someone and a little phrase could be said in passing which really tickles me in all of the correct (creative) regions. Sometimes they come simultaneously. Of course if it’s a band jammed song then it mainly starts off with melody, and some horrendous improvised lyrics…but we won’t talk about that…

Q: If you could have any musical instrument in the world, which one would it be and why?
A: A ronroco which is an instrument from the Andean regions. I just think it sounds beautiful, and I only heard it for the first time in a Playstation game called The Last Of Us. Ooh and a shakuhachi because why not?

Q: If  I was visiting London, the city you are based in, where would you take me to see/hear great live music? I understand that London is as big a place as New York…
A: Hmmm….depends what you’re looking for really. I have found the best gigs are wherever there are great bands/artists playing, so I’d just take you wherever a friend might be performing, whether it be in Camden, Shoreditch, Dalston, or even their nan’s font room. I have a lot of very talented friends who if they are reading this will definitely share it because they’re really really nice…ahem…

Q: If you could choose to live in a decade (music, style, etc.) which one would it be?
A:Instantly got to be the 60s because of art, music, free love and every other completely valid reason. However my final choice would have to be Rome between 54-68 AD; stuff was pretty mental back then…

Awesome! Thanks so much, Jim. I am looking forward to seeing you guys live one day (soon) and to chat in person. For real.

Listen to the other so far officially released track “Hollow Eyes” and follow the band on Facebook to stay up-to-date: