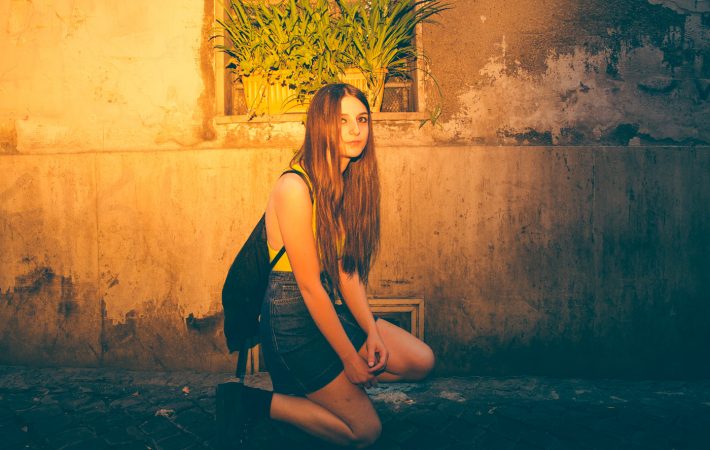 Behind GIUNGLA, Italian for ‘jungle’ and pronounced ‘giùn-gla’, is young artist Emanuela Drei. GIUNGLA has been touring for the most part of this year and will continue doing so, and yet she not only found the time to create new songs but to have  a little Q&A chat with us. To give you an idea what Ema aka GIUNGLA sounds like, listen to the pulsating, sparsely instrumented and simply captivating “Wrong”:

And now let’s hear from GIUNGLA herself:

What was the last song that got stuck in your head?
No Rest by Bonzai (actually, the whole album is stuck in my head).

Do you have a song from your childhood, one you always enjoy hearing again?
There’s an Italian silly song called “Cin Cin Con Gli Occhiali” (the english translation is: “cheers with eyeglasses”) by Herbert Pagani that reminds me of the evenings spent with my parents listening to records.

What was the first album you have ever bought? Digital, vinyl, CD or cassette tape?
‘Spice’ by The Spice Girls on cassette tape.

Do you still possess this album?
Sure, it’s a piece of memorabilia to be proud of!

Is there a song you’d like to cover?
Actually I’d love to cover many songs and play with very different styles. Yesterday I was thinking about covering Ge Ur Freak On by Missy Elliot.

What’s your songwriting process like? What comes first, melody or lyrics?
Usually the melody comes first, so I kind of shape the words to the melody and they kind of fall out while I’m working on the song.

If you could have any musical instrument in the world, which one would it be and why?
It would be a great great voice, because you definitely can’t buy that.

Playing live, what has been your favorite venue/festival so far? And why?
My favorite festival so far was Festival Moderno in Milan because I had the chance to share the stage with many artists I love like Grimes, Blood Orange and Sofi Tukker. It was amazing.

If I were to visit Bologna, Italy, where would you take me to see/hear great live music?
I would take you to Covo Club. Bands like The XX and Franz Ferdinand played this venue when not many people knew about them yet. A few months ago I saw The Internet there and they were really great.

If you could choose to live in a decade (music, style, etc.) which one would it be?
I’d pick the 90’s! My gig wishlist would be endless.

Thank you Ema for your time and all these wonderful insights. Hope to see you live as well – maybe next year?!

Listen to the alluring “Sand”:

Since we asked the question about cover songs, turns out Ema has created her own stunning version of Empress Of’s “How Do You Do It”. The original song is just so good especially also in its sparse electronic instrumentation. GIUNGLA just does a similar restrained version but with lots of bass and some trumpets instead. This is as good a cover as they come! Listen for yourself: