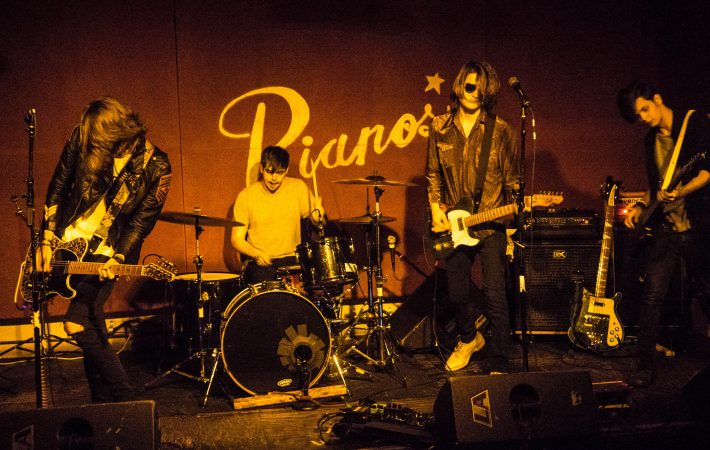 Already a fan of Hunter Sharpe, it was a no-brainer to come out early to Pianos last Tuesday night to see the four young musicians from Austin, TX making their New York debut. There is something magically special about firsts! Hunter Sharpe lending the band his vocals, rhythm guitar, song writing chops as well as his name, and his band mates Marlon Sexton on lead guitar, Colton Kincaid on bass and Hunter Pierce on drums, might be still on the younger side in age yet not in talent, skills or stage presence.

As I much as I enjoyed their show at this year’s SXSW (photos and review here), I enjoyed seeing them playing in New York even more. They sounded just perfect in the beloved Lower Eastside venue. The smaller stage (tiny compared to the one in Austin’s Convention Center) made for a tighter set-up and the really nice lighting that night did their part. While Hunter Sharpe has released with the fierce “Elephant Walk” only one song so far, the material they performed was impressive, offering plenty great and clearly distinct rock songs. There were slower, moodier numbers among heavier and darker ones with some more upbeat, almost pop ones thrown in.

After the show, when I chatted with Hunter about this and that, I also told him which song I liked the most and that’s when his eyes lit up and with a wide smile he confirmed that this one in particular is his favorite too! Hopefully, he will put out that one soon in addition to some of the other super cool songs. Favorites aside, here’s a band, that if everything goes “right”, are poised to become really popular because all is there: look, talent, stage presence and let’s not forget great, often irresistibly catchy indie rock. Be sure to see Hunter Sharpe live when you can and for now, enjoy some concert photos.

Click on a photo to enlarge it and to start slide show.