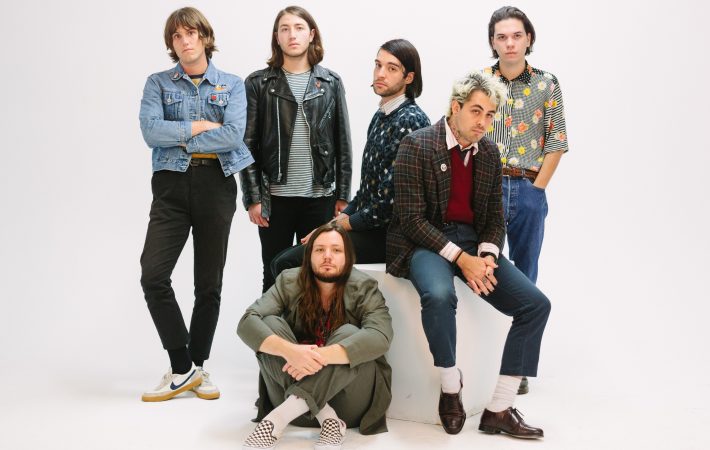 This is exciting music, that I don’t get tired of listening to, and speaking of exciting, I am thrilled that Jason was game for a Q&A session,  providing some great insight. Makes me want to listen to Jason’s favorite records together with him and dive into the question about favorite decades a little further. Major extra points for mentioning Tears for Fears – if I wouldn’t love HUNNY already, this would do the trick.

What was the last song that got stuck in your head?
“Too Good” by my boy Aubrey Graham.

What was the first album you have ever bought? Digital, vinyl, CD or cassette tape?
First CD I ever bought with my own lawn mowing money was probably American Idiot. My first vinyl purchase came much later, in high school when I started getting into that. I’d bought a couple 7″s from a couple Sabertooth Zombie shows so those were technically my first. After that I think my first record store 12″ purchase was Everything Went Black & Reinventing Axl Rose. But before that in my younger years I was the proud owner of three cassettes that I inherited from my brother that were in constant rotation on my yellow Walkman so I’ll throw those in for good measure. Pink floyd’s Division Bell, Nirvana’s Nevermind, and the original motion picture soundtrack to Bill & Ted’s Excellent Adventure. I feel like those three records say more about me than the first one I bought with my own money. I still love American Idiot though, don’t get it twisted.

Do you still possess these albums?
I still own everything I mentioned, yes of course. The Green Day CD is probably somewhere in my dad’s car though lol. CDs are pretty useless anyway. I think they’re a dying format. I hope that we never have to print another CD again. The only physical forms of music worth owning are tapes and records.

Is there a song you’d like to cover?
We’ve got a real, real long growing list of covers that we wanna do. We’ve done The Cure’s “Just Like Heaven,” Beach Boys’ “Kokomo,” Village People’s “YMCA,” The Cardigans’ “Lovefool,” The Cars’ “Just What I Needed,” Buzzcocks’ “Ever Fallen In Love,” and probably a couple more I’m forgetting. So that’s like maybe quarter of the way through our list. we’ve tossed around the idea of putting a free EP of a few live covers every couple months but it’s hard to find the time. :/

What’s your songwriting process like? What comes first, melody or lyrics?
Melody always. I learned that at a very young age from 101 Dalmatians. I care much more about the song being good than what I’m saying. melody is the most important thing always. We write all parts of all songs together. Someone will usually just start playing a riff while we’re setting up at practice and one by one we all just join in and jam on it and that just turns into a song.

If you could have any musical instrument in the world, which one would it be and why?
I’d want the holophoner from Futurama. No explanation needed on that one.

Playing live, what has been your favorite venue so far? And why?
Tough question. I love a lot of different venues for a lot of different reasons. a lot of my favorite places to play are tiny DIY type spots. As far as real venues go, 9:30 Club in D.C. of course is awesome. We love Stubbs in Austin a lot. I think my top pick has to go to The Constellation Room in Santa Ana. That venue has sort of become our stomping grounds. I think that’s the most at home we ever feel playing shows. We love you Santa Ana.

If you could choose to live in a decade (music, style, etc.) which one would it be?
Another tough question. I’m gonna have to split it. I think my favorite place in time ever has got to be New York in 1977. So I’ll go 77-87. The best things in real alternative music happened in that time frame as far as I’m concerned, from proto-punk to new wave to hardcore to the beginnings of emo and everywhere in between. Not to mention you’ve still got some late disco going on and then massive pop acts like Michael Jackson or Tears For Fears. plus all the brat pack movies came out in like 85/86 so that’s a bonus. So much good shit happened in that time frame it’s insane. Fuckin goth! Fuckin BLACK FLAG! insane. So much good steeze going on from plaid disco suits to tight black levi’s and beat up leather jackets and death-rock garb. too much good shit going on….and no internet! Yeah, 1977.

This was A M A Z I N G! Thank you very much for your time and your thoughtful, inspiring answers, Jason!

Follow HUNNY on Facebook, Twitter, Instagram and tumblr and go see them live, because they’re in the middle of touring the States. While checking your local dates, further down, listen to “Vowels (and the Importance of Being Me)”: