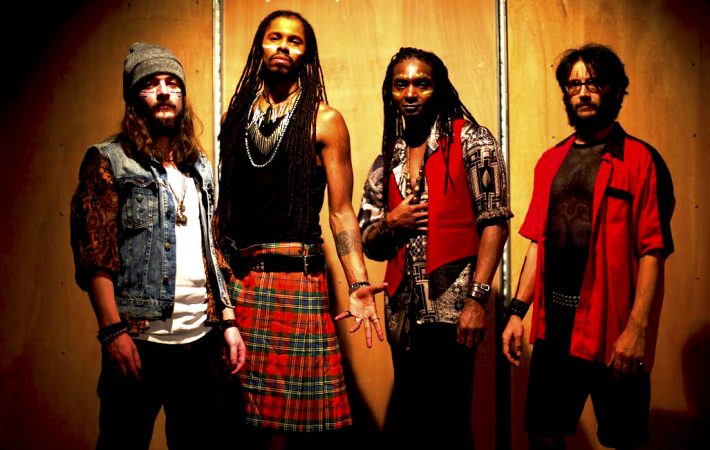 “Jah Jah” is a pulsating rock-fusion gem, featuring dubstep and moving vocals, growling bass lines and pealing guitar runs with scintillating effects. This new single by London-based Mangoseed reminds me of some of the best works of Asian Dub Foundation and I couldn’t be happier about the opportunity to premiere the dazzling “Jah Jah”!

Living in a multi-cultural city as well, I am always intrigued by bands comprised of members from diverse backgrounds. I am curious about what can happen if people from different countries, islands and even continents come together. As for Mangoseed, the four members are musicians of Trinidadian, Jamaican, Australian and Irish descent, originally formed by vocalist Nicholai La Barrie and guitarist Karlos Coleman, with the later addition of Richard Hardy on bass and Sam Campbell on drums. Maybe not surprisingly, this makes for an alluring blend of global sounds, like taking bits from ska and soca, mixing it up with jungle and funk, on a solid foundation of rock and punk, yet all of it in exhilarating high-energy and absolutely danceable.

Lyrically, “Jah Jah” is a fiery exaltation as relevant to the displaced of today as much as yesteryear. It is the tale of people traversing the desert in search of sanctuary, hoping that the wisdom of their God and forefathers will guide them to a safer land and a better life. It is an ode passionately delivered by Mangoseed frontman Nicholai, who directs the song to a ferocious climax with his increasingly quickfire patter, a rhythmic torrent culminating in praise to “to the older ones of creation”.

“Jah Jah” makes my heart beat a little faster, and leaves me positively stunned. Listen to our Song Pick of the Day, listen to “Jah Jah” now: