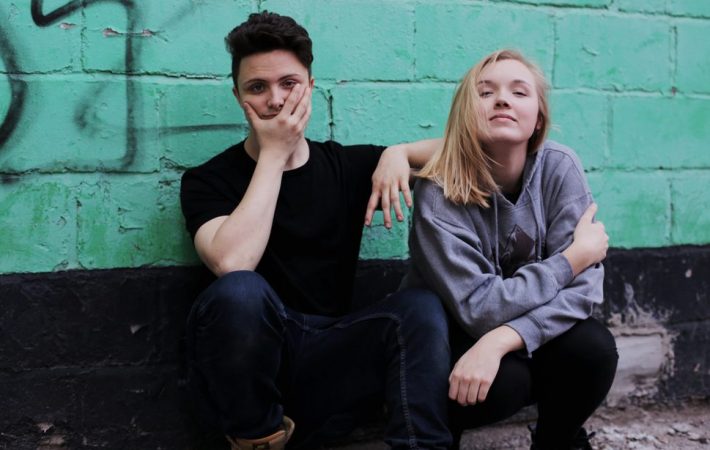 Can only one song make you fall head over heels in love with a band? Yes, it can! There’s magic happening in “Overbored”, our Song Pick of the Day from July 1st. Today, Babygirl, the charming duo behind “Overbored”, have released their four-track EP “As You Wish” and we considered this perfect timing to learn a bit more about Kirsten Clark and Cameron Breithaupt, who together are Babygirl. To set the mood, listen to the beautifully restrained and endearing “Overbored” and keep on reading:

Pretty cool for a debut single, no? Proof that this is no fluke, is the just released EP “As You Wish”. I am thrilled that Kirsten and Cameron, living in Toronto, took the time to chat with us in our Q&A series. Unsurprisingly, their answers are as delightful as their music. The addition of “clean” to the question about the first album put a smile on my face, and I especially like, and agree with, the answer to their last question. Let’s dive in:

What was the last song that got stuck in your head?
Kirsten: A song called “Can’t Slow Down” by a local songwriter named Danielle Knibbe. Ear worm.
Cameron: Fire and Desire by Drake.

Do you have a song from your childhood, one you always enjoy hearing again?
Kirsten: Any Dixie Chicks or Norah Jones – my mom often played them around the house.  Cameron: www.nevergetoveryou.com by Prozzak.

What was the first album you have ever bought? Digital, vinyl, CD or cassette tape?
Kirsten: I think the first album I ever purchased for myself was Avril Lavigne’s debut album “Let Go”.
Cameron: The Eminem Show (Clean) on CD. It was with birthday money and my parents wouldn’t let me get the dirty version.

Do you still possess this album?
Kirsten: Of course!
Cameron: Lost in the shuffle.

Is there a song you’d like to cover?
Kirsten: I think I can speak for both of us when I say we’d love to Babygirl-ify a Taylor Swift song. Probably a toss up between Wildest Dreams or You Belong With Me.

What’s your songwriting process like? What comes first, melody or lyrics?
Kirsten: Generally my melodies are dictated by a lyrical idea or premise. I usually write the two at the same time, but I’d say that the lyric idea comes a few milliseconds before the melody.  Cameron: The best stuff all comes at once. Often I’ll sing a melody and just mumble, and the things I’m mumbling will eventually take shape into words and that’ll be my first draft. Once the first verse is written and the melody is nailed down then the second verse is written to that melody.

If you could have any musical instrument in the world, which one would it be and why?
Kirsten: A grand piano. A simple answer I guess, but it’s such an inspiring instrument to write with.
Cameron: The most valuable one, so I could sell it and get a bunch of other ones.

If I were to visit Toronto, the city you are living in, where would you take me to see/hear great live music?
Kirsten: There’s a lot of great venues in the city – I really like the Danforth Music Hall. Depends on the music though!
Cameron: Danforth is pretty great. We’ve also seen some great stuff at Burdock recently. It’s a very nicely designed and intimate space. Honestly, this city has so many incredible spaces and so much local talent. There’s no way we could list it all here.

If you could choose to live in a decade (music, style, etc.) which one would it be?
Kirsten: The one I’m living in now.
Cameron: Ditto. Where else can you get Babygirl?

Thanks so much, Kirsten and Cameron! That was lovely and inspiring.

Can’t get enough of Kirsten and Cameron? Then watch this totally charming one-take video to “Overbored, directed by David Bedford:

While “It’s Getting Late” and “Everything’s Happening Without Me”,  the other two tracks aside from “Overbored” are on the  more upbeat side, “Unwant You” shows Babygirls’ mellower side, featuring both their vocals and a grand piano only. Listen to the beautifully melancholic “Unwant You”: