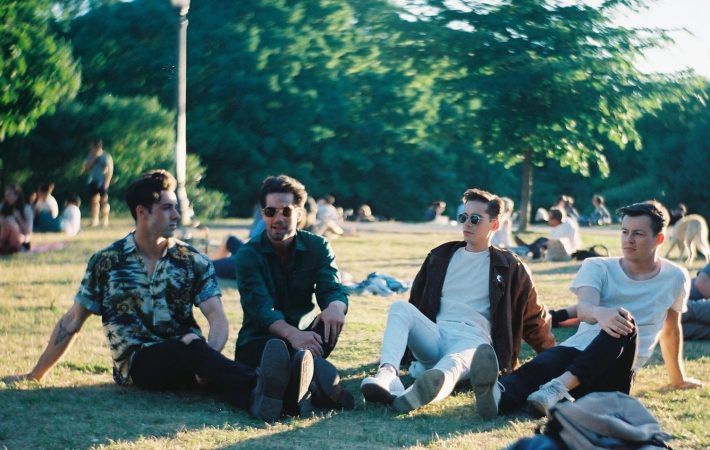 With their alluringly understated indie-pop, BLAJK are easily one of the hottest new bands to come out of Toronto, Canada these days. Just this week, BLAJK released their much-anticipated, amazing debut EP “Limited” of which we featured two singles already: the wistful “Good Liars” as well as the dark and moody “Lethal”.  Wouldn’t it be fun to know a little more about BLAJK? Let’s start by listening to “Lethal”, the second track and single from “Limited”:

While I first heard of BLAJK in December of last year, I didn’t know that their band name would actually be pronounced like the color ‘black’. The name was inspired by an old map depicting Sweden, where in tiny print a plot of land was marked that way – and just like that, a cool band name was born! Who would have guessed that the four are contemplating to cover a Nancy Sinatra song?

Ben, BLAJK’s guitarist, took the time to chat with us. His answer to our last question might very well be my favorite, because it made me laugh out loud, and I also love where he would take… but let’s start from the top, shall we?

What was the last song that got stuck in your head?
‘Can’t keep checking my phone’ by Unknown Mortal Orchestra

Do you have a song from your childhood, one you always enjoy hearing again?
Anything off ‘Rumours’ by Fleetwood Mac. Household soundtrack.

What was the first album you have ever bought? Digital, vinyl, CD or cassette tape?
Soul Decision on cassette… I was very young and had to borrow the money.

Do you still possess this album?
It probably lives somewhere in the depths of my parents garage. In a box with some power rangers.

Is there a song you’d like to cover?
We’ve started working out a cover of ‘Bang Bang’ by Nancy Sinatra. That’s starting to sound really cool. May eventually make its way into the live set.

What’s your songwriting process like? What comes first, melody or lyrics?
The instrumentation always comes first for us. It’s important that we vibe to the music before thinking about what the song is going to be about.  The energy of the song usually dictates its lyrical direction.  Then when its time for lyrics, melody usually comes first.

If you could have any musical instrument in the world, which one would it be and why?
A church organ would be pretty cool. However, I don’t think our downstairs neighbours would appreciate the installation.

Playing live, what has been your favorite venue so far? And why?
So far, playing the Mod Club in our home town of Toronto was a very special moment for us. First of all, its a big room with arguably the best sound in the city. But it was the first time we’d played a sold out show thanks to our friends Young Empires. They we’re cool enough to have us open up for them.

If I were to visit Toronto, where would you take me to see/hear great live music?
We’d head down to Queen st and see what’s happening at The Drake. It’s one of the best places to check out live music in the city. A smaller room but amazing sound and always impressive acts, both local and international.

If you could choose to live in a decade (music, style, etc.) which one would it be?
We definitely have different answers for this. Jordan and myself would say the 80’s hands down. Thomas would definitely say the 70’s. And because I’m writing this and not Ray, I’ll throw him under the bus and say he’d kill to live the 90’s again.

Thank you, Ben! Toronto sounds like such a beautiful place, and you guys definitely put it on our map to visit. Soon. For now, there’s “Limited” out on iTunes.

… and because I really dig the EP, why not including one more song? Listen to the melancholic, chill and extra catchy “Stepford”, and get the EP on iTunes.