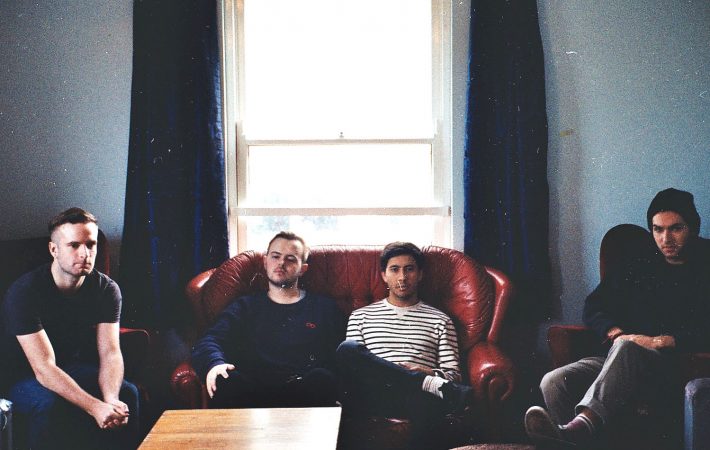 It was March, when I first came across Lightcliffe and loved their single “Please Leave” so much, that I made it Song Pick of the Day. During that time and there after, I also had the nicest email conversations with Ben McDowell, Lightcliffe’s guitarist and it was only a matter of time, that I asked him to be part of glamglare’s Q&A series. While Ben sent me the answers to our questions back in early June, you can only read them now, a month later. Eventually though, it doesn’t really matter, because it’s so much fun to learn that Ben would like to cover a Taking Back Sunday song or whose guitar (it had to be guitar, no?!) he’d like to get if he could have any musical instrument in the world.

To get into the groove of things, listen to Lightcliffe’s latest single “Roses” and then scroll down to start reading our Q&A session with Ben:

What was the last song that got stuck in your head?
Strangely, Kanye West’s ‘Waves’. I think it’s the sample thats repeated through out the song that sticks in my mind, the sample of someone shouting “Turn it up”. I have a bad habit of getting in my car with Alex (the bass player of the band) and putting it on, and just watching him either laugh or Sigh.

Do you have a song  from your childhood, one you always enjoy hearing again?
Yeah, I always think of ‘You get what you give’ by New Radicals. It’s a song that never fails to remind me of my childhood, being in the car with my family driving somewhere in summer holidays, enjoying any seldom sun.

What was the first album you have ever bought? And on which medium: digital, vinyl, CD or cassette tape?
The first album I ever bought/owned was the ‘Space Jam’ (movie) soundtrack on CD, that film about Michael Jordan playing basketball with all the Looney Tunes characters. I bought it when I was a little kid, visiting some family in California. It had some really cheesy songs on it, but there were some really good songs on it, D’angelo is if I’m not mistaken. And of course the space jam title sound track was really great.

Is there a song you’d like to cover?
Funnily enough, all of our rehearsals seem to involve breaking into a short rendition of something, we get distracted very easily. Having the privilege of playing with Jimmy (guitar) is that he will dive into songs that you won’t have heard for at least a year. We do keep threatening to cover ‘MakeDamnSure’ by Taking Back Sunday to play at a house show, sometime. but we’ll see…

What’s your songwriting process like? What comes first, melody or lyrics?
It’s certainly an interesting one. I don’t think we have found any sort of formula for it yet, which maybe a good thing. But recently, one of us will turn up with an idea in a relatively minimal form, so as to let the rest of us put our parts to it and maybe change anything structurally. Recently Jimmy has been writing some of the newer songs, with a good idea of what he wants it to sound like. We do have a habit of coming back to the same song a month later and changing the structure almost completely, if one of us isn’t entirely happy.
Lyrically, I know that Theo, Jimmy and myself all have hundreds of notes on our phones for lyrics and ideas. It’s been a relatively shared effort for the most part, but there are songs where one of us has written the bulk of the lyrics to a song and one of us may add a couple of lines to finish it off.
It’s also a very similar story when it comes to vocal melody. So in all, it seems a little different every time we sit down to write a song, it’s never really boring.

If you could have any musical instrument in the world, which one would it be and why?
Ah, that’s a very tough question and I’m sure I would probably change my mind all the time on that one. Maybe something like one of Hendrix’s guitars or maybe the mellotron used on Strawberry fields, Something with a history would be very cool.

Playing live, what has been your favorite venue so far? And why?
I think so far, playing at The Lexington (near Kings Cross train station), has to be my favourite to date. We opened for two really great bands, Enemies (who headlined) and Delta sleep. They’re both a little more math-rock than we are but it was great to play with those guys, I had seen both those bands play a year before at another venue, together, and it was a little surreal to then be supporting them. We were playing to a sold out crowd, obviously non of which were they to see us, but I hope they enjoyed it, we had some really great comments after we played, from some lovely people.

What’s the most bizarre thing to happen while you were onstage?
I don’t know about bizarre, but i’ve definitely played shows that feel cursed, where everything goes wrong. We’ve all also done shows where you play to practically nobody. It can sometimes be quite fun, you end up just mucking around and showing off to each other. It seems to be if we’ve just been booked on the wrong bill, so no one is there to see you.

If I were to visit London where would you take me to see/hear great live music?
If you were to visit London, I would make sure we go to Ronnie Scott’s, my favourite venue and place in all of London. Late night Jazz in the heart of Soho never gets old. Aside from that ‘The Old Blue Last’ in Shoreditch is a great place to see new live acts for free, every night the week. I have seen so many of my favourite bands in there. There’s also Moth Club in Hackney, which has a definite ‘working men’s club’ feel to it, it’s a great place to see a band.It feels like you’re never stuck for choice in London, for gigs and venues.

If you could choose to live in a decade (music, style, etc.) which one would it be?
I think it’s probably getting a little unoriginal to say these days, but the 60’s. lots of bands and songwriters released some of their best work in that era. And I can’t imagine how exciting it all must have been to have witnessed it all. I’m a big Beach Boys fan, so It would have been pretty mind blowing to have heard Pet Sounds come out after all their other previous works. I know, a lot of 90’s emo inspires Lightcliffe, but I think the 60’s just about wins it for me.

Awesome! Thanks so much Ben, it was great fun also special thanks for all the insights into your songwriting process as a band. And… I hope to make it to London in the next couple of months (years) because I’d love to visit these places you’ve mentioned and more!