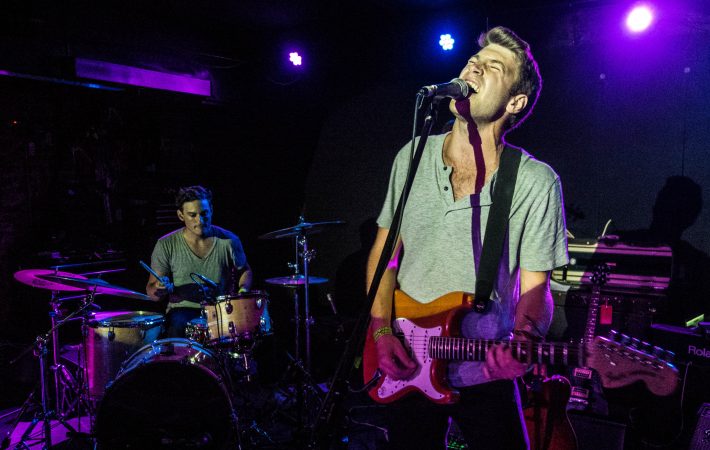 Sometimes people have to move away in order to be appreciated where they came from, although that’s hardly possible in the case of indie rock trio Foxtrax who can look at a sizable, loyal fanbase already. Beginning of 2016, the three New Yorker (Long Island to be precise) took their instruments, their already recorded material and headed out West to meet with producers there. Can’t blame them because East Coast winters are brutal and they had the chance to work with some well-known experts in the music industry who took notice of the gifted trio.

Needless to say, Mercury Lounge was sold out that Friday night and Foxtrax played in front of an enthusiastic crowd who truly celebrated the release of “Cabin“. For this very special New York concert Ben Schneid (vocals, guitar), Jared Stenz (bass) and Jon Stenz (drums) were skillfully supported live by Alex Grimes (viola) and Rob Araujowhich (keys), which made for a rich and beautiful sound. All in attendance agreed that this was a show to remember, because Foxtrax are fantastic live!

Foxtrax made it back to their new home in Los Angeles already and might not be back for a while. Luckily, there’s some reassurance with the last track on “Cabin”, the bluesy, soulful “I’ll Be Back For You”…

–> Click on a photo to enlarge it and to start the slide show.

Get “Cabin” on iTunes and Spotify now.

While every track on “Cabin” is a winner, “I’ll Be Back For You” conquered our hearts forever:

With “Go It Alone” Foxtrax show their passionate and irresistibly catchy side. This track has ‘hit potential’ written all over it! Listen to “Go It Alone” now: