[PHOTOS] Wall Give a Breathtaking Performance at Union Pool (Northside 2016) 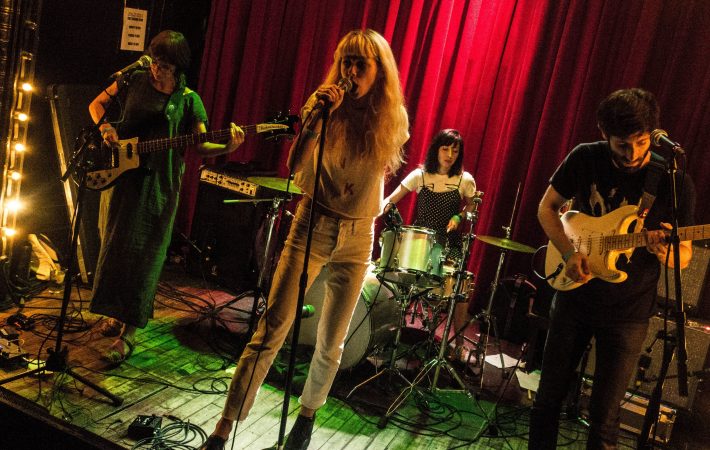 [PHOTOS] Wall Give a Breathtaking Performance at Union Pool (Northside 2016)

The decision to head over to Union Pool to see Wall live was quickly made after having listened to their music on Wharf Cat Records Bandcamp page. It was after all the label’s showcase, with more interesting bands performing.

We clearly had Wall in mind, when we arrived at the basically sold out venue and were blown away by what Sam York (vocals, guitar), Elizabeth Skadden (bass), Vince McClelland (guitar) and Vanessa Gomez (drums) put on stage! It was dark wave, dark post-punk performed in fast succession, mercilessly and with great skill delivered. While Wall’s music sounds oddly familiar, it’s not like any other band in particular. They take their 80s influences and piece them together as they seem fit, and create something new and exciting.

Sam York is a mesmerizing performer and it is a great joy to see her and her band mates on stage. This won’t be the last time we came to see the four, based in New York, playing live. To learn more about Wall check out this really cool interview with The Quietus and get an idea for their live show with our photos here.

–> Click on a photo to enlarge it and to start slide show.