Q&A with Josh Flowers & The Wild 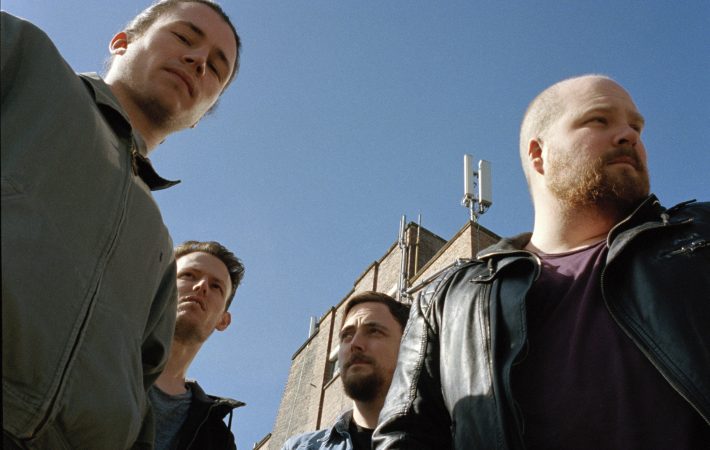 Q&A with Josh Flowers & The Wild

In the mornings, usually the indie rock or electronic station of Apple music are turned on and often enough I already know and like the artists being played, or I don’t particularly care to know at that very moment. Two weeks ago though, I couldn’t head fast enough from prepping breakfast over to the computer to find out whose song was being played! It was “Smoke In my Eyes” by Josh Flowers & The Wild, a gritty, shimmering and simply amazing blues-rock gem, which I wanted to hear again, of course.

Needless to say, I spent my morning listening to their just released EP “Let the Dirt Live”, checked out the website, and then contacted Josh in London, UK still the very same day about glamglare’s Q&A series… Luckily, Josh Flowers (vocals, guitar, harmonica) and his band mates Squiff Wordsworth (cello, vocals), Reuben Harsant (drums) and Dave Holden (bass) were game, and here are there answers to our questions. Thanks so much guys – hope you’ll have a great time while on the West Coast this week.

What was the last song that got stuck in your head?
Josh: Brass In Pocket by Pretenders. That song has so much attitude, it’s a classic. Got stuck in my head after re-watching ‘Lost In Translation’ with that great Karaoke scene.
Dave: Mine was Hello by Adele… couldn’t escape that bloody chorus!
Squiff: No Sleep Till Brooklyn by the Beastie Boys.
Reuben: Probably Thomas The Tank Engine TBH.

Do you have a “go-to song” from your childhood, one you always enjoy hearing again?
Squiff: Basically anything by Pink Floyd but especially Albatross or Division Bell.
Josh: Unknown Legend by Neil Young is one of them. My Dad had it on cassette, we used to listen to it in the car on the way to school every day.
Dave: Bullet In The Head by Rage Against The Machine. I was an angry tweenager.
Reuben: Again I’d have to pick Thomas and the gang.

What was the first album you have ever bought? And on which medium: digital, vinyl, CD or cassette tape?
Josh: I bought Dookie by Green Day on CD. A punk rock classic.
Dave: I’m proud to say mine was Nevermind, CD I think.
Squiff: Americana by The Offspring! Give it to me baby.
Reuben: The aforementioned theme song on every known format including the now obsolete Betamax.

Is there a song you’d like to cover?
Josh: Always wanted to cover one of Bruce Springsteen’s tunes from the album Nebraska. Maybe Atlantic City.

What’s your songwriting process like? What comes first, melody or lyrics?
Josh: It depends entirely on the song, there’s no formula. It just starts with a strong idea, whether that’s a lyric, a melody, a chord progression, a catchy riff. Then the song usually grows out of that starting point.

If you could have any musical instrument in the world, which one would it be and why?
Josh: I want a pedal steel. My good friend Joe Harvey-Whyte plays one around London, we jam a lot. It’s just such a lovely unique sound. Takes me straight to a porch somewhere in America!
Reuben: Does a train whistle count?
Squiff: I like the look of those little thumb pianos.

Playing live, what has been your favorite venue so far? And why?
Josh: We love the Borderline in Central London, that’s a favourite spot. It’s dark and sweaty and pretty small. Though it was very cool to play at Kentish Town Forum with The Zombies last year.

What’s the most bizarre thing to happen while you were onstage?
Josh: I can’t really think. Once Squiff fell over a foldback speaker and did a forwards roll into our guitar rack, knocking over all of our most expensive gear. I guess that was more dramatic/comical than bizarre though. I’m sure there are many more that I can’t bring to mind.

If I were to visit London where would you take me to see/hear great live music?
Josh: Ain’t Nothin’ But The Blues on Kingly Street. Best music bar in town.

If you could choose to live in a decade (music, style, etc.) which one would it be?
Josh: I would go straight back to the 60’s, move to San Francisco and join Ken Kesey’s acid cult.
Squiff: I’d choose the 60’s too but I’d be a roadie for The Stones or The Who.
Dave: 70’s, for the funk!!!!
Reuben: Early 90’s for the quality tv programming!

Thanks so much for your time, Josh, Squiff, Dave and Reuben. It’s such a treat to having learned a little more about Josh Flowers & The Wild.

Josh Flowers & The Wild are currently stateside, on the West Coast to be precise and play this Wednesday, June 22nd in Los Angeles at The Hotel Café at 10:00 pm. Ticket info here.