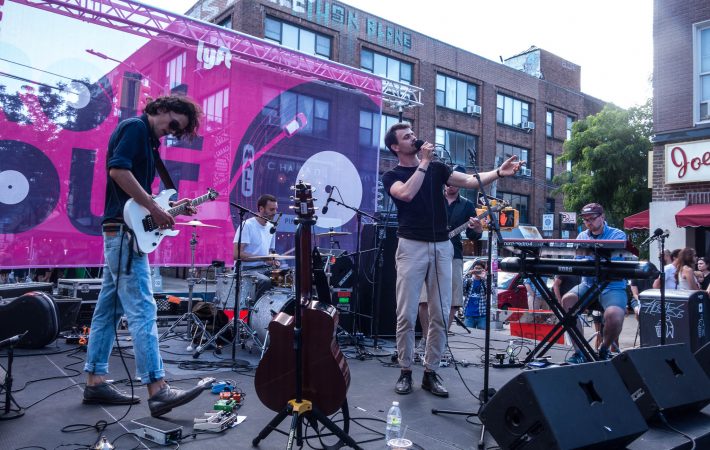 Northside Festival, as opposed to SXSW or CMJ does not slow down on Sunday: there is party all over Bedford Avenue, including a smaller outdoor stage where we caught parts of the set by Bulgarian/German band Malky, whose smooth pop music fitted perfectly for a summer afternoon.

Meanwhile, at the McCarren Park stage, serious lines began to form for the Brian Wilson show later in the evening. We had different plans, but for a while we enjoyed the sunshine, the atmosphere and the set of Spanish band Hinds from the distance.

From there, we headed over to one of the busiest venues of the festival: coffee shop/bar Muchmore’s, where Asbury Park, NJ rock four-piece Dentist was on. This is the beautiful thing of a festival like Northside: you drop in some bar, some band starts playing and you realize that they are really good.

Throughout the festival, we ran into Kaitlyn Mills of Lantrns at different occasions and we didn’t want to miss her band playing at the brand new Bushwick venue Gold Sounds, which turned out to be a beautiful place. Lantrns were fantastic too with their dark, melodic blend of rock and electronic music – we hope to hear more from them soon.

The last show we caught was Dead Life Echo with an “ambient set” at Pete’s Candy Store, which includes only the two guitarists LG and Ana Breton and shows off their quiet side – the perfect lullaby for a fun-packed Northside Festival. See you there next year!