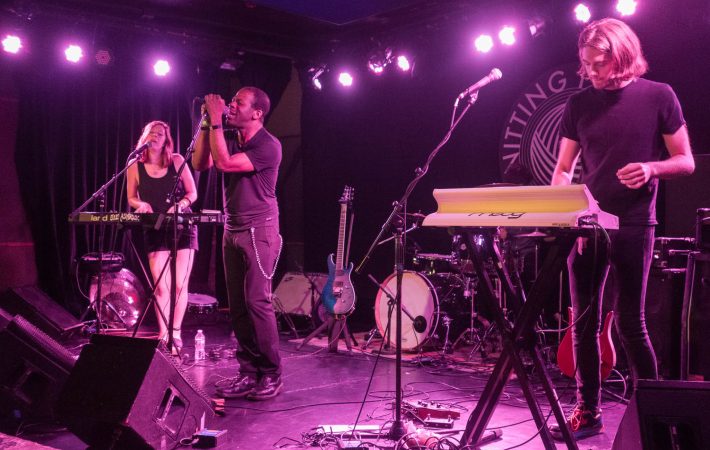 Finally it was the day of our showcase at Knitting Factory, which we put together with our sister blog Audiofemme. Even without Painted Zeros, who had to cancel due to illness, we could present an exciting lineup, who many came out to see!

First up were Blak Emoji, who effortlessly blend electronic, dance and rock music and put on a killer show on stage. (see cover photo)

After we saw Plastic Waves this year in Austin, they were among the first we invited to play the showcase. The Boston five-piece do psychedelic rock with glistening synth lines – Pink Floyd comes to mind.

Headliner were the power sisters of Chaos Chaos, who we adore also since we saw them the first time in Austin. Great vocals, great beats and quirky but catchy pop songs make their show an experience. Unfortunately none of their newer material is available (yet!), but they told us that new music is coming out later this summer.

After a dinner break we went briefly back to Knitting Factory for another Boston band Vundabar, who always put on a great show and are a lot of fun to watch.

The last event was the Wharf Cat Records showcase at Union Pool. Originally we wanted to see Bitchkraft, but they had to cancel due to visa issues, so we just bought their new album. Instead we saw the sets of Posse from the distance and Wall from close up. The latter play (sometimes very) short songs full with raw energy and singer Sam York is an incredible performer, and a band we surely want to see live again!