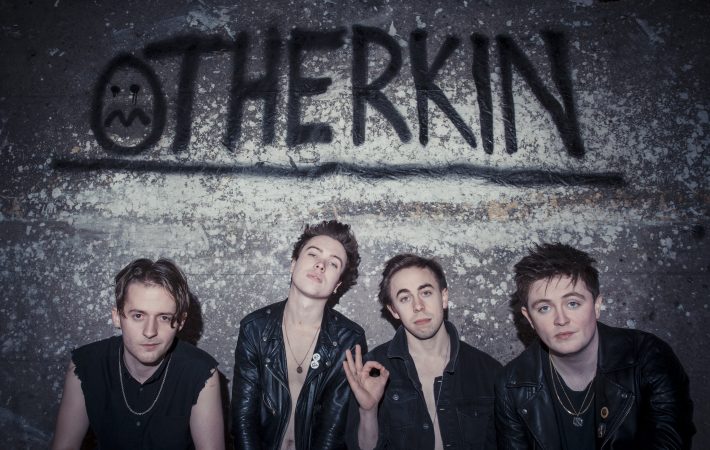 OTHERKIN hailing from Dublin, Ireland have an EP coming up later this month, and recently released the infectious “Yeah, I know”. It’s an amazing power track, so we made it Song Pick of the Day. Wanting to know more about the four from Dublin, we asked them to be part of our Offstage series.  David Anthony, OTHERKIN’s man on bass, took the time to answer our questions. Thank you, David!

What was the last song that got stuck in your head?

Baby’s All Right by Inheaven. We caught these guys at the Great Escape in Brighton and they were killer.

Do you have a “go­to song” from your childhood, one you always enjoy hearing again?

What was the first album you have ever bought? And on which medium: digital, vinyl, CD or cassette tape?

Luke’s first album was I’m Number One, So Why Try Harder by Fatboy Slim. He put the CD on in his Dad’s car and didn’t realise that the third track is just a loop of the phrase “Fatboy Slim Is Fucking In Heaven”. Didn’t go down too well.

Fatboy Slim Is Fucking In Heaven, by Fatboy Slim. Inheaven should really cover it, be so tight.

What’s your songwriting process like? What comes first, melody or lyrics?

Melody first, lyrics later. A lot of the time we don’t have them down until we’re in the studio!

If I were to visit Dublin where would you take me to experience great live music?

The Workman’s Club. They do some mean karaoke as well!

Playing live, what has been your favorite venue so far? And why?

We played the Paradiso in Amsterdam at the start of the year for London Calling festival, and the place was amazing. People were going mental, can’t wait to return in September.

What’s the most bizarre thing to happen while you were onstage?

We were headlining a festival last weekend and the power went out six times during our set. Made for some impromptu full band drumming.

If you could choose to live in a decade (music, style, etc.) which one would it be?

Definitely the 70s. Being around to see the birth of Punk must have been quite the trip.

Thanks again, David – this was fun. And now “I Was Born” by OTHERKIN: