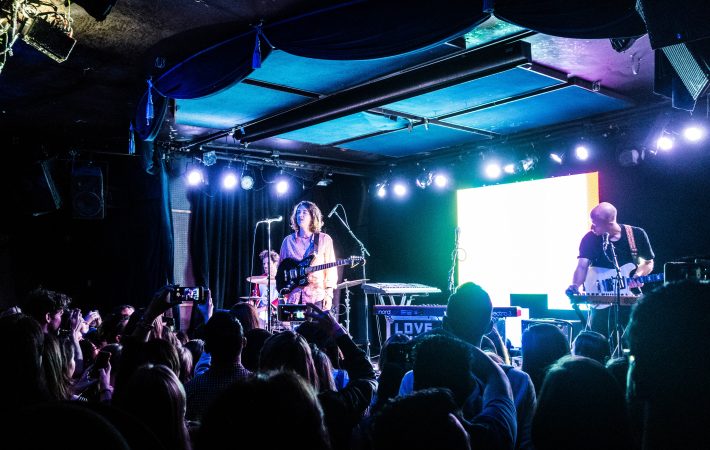 Having followed synth pop trio LANY for a while, I knew that Brooklyn’s rather intimate Knitting Factory would be the real deal and so I bought tickets as soon as the show got announced. Rightfully so, because the event was sold out in the blink of an eye!

It’s a special experience to be part of a show with true fans as opposed to people who might or might not like the sound. Clearly, the crowd at Knitting Factory who came out last Thursday were all fans, delighted to see their favorite band play a smaller venue than they usually do, and before they venture on to sell out places like Terminal 5 and beyond.

Granted, Paul Klein (vocals, synths, guitar), Les Priest (synths, bass, vocals) and Jake Goss (drums) knew exactly how to pull it off. Paul Klein is quite the charismatic entertainer, singing, playing synths, flirting with the audience, pulling a girl from the audience on stage being his “live mic”, playing guitar, and then some… he knows exactly what he’s doing.

LANY just make it work. Everything. Their song writing chops are great and their delivery is spot on. Go see LANY live, and if you can’t, listen to their EPs and be prepared to be swept away.

(Click on a photo to enlarge it and to start the slide show.)

All concert photos by glamglare.com – Elke Nominikat and Oliver Bouchard