Q&A with The Landmarks 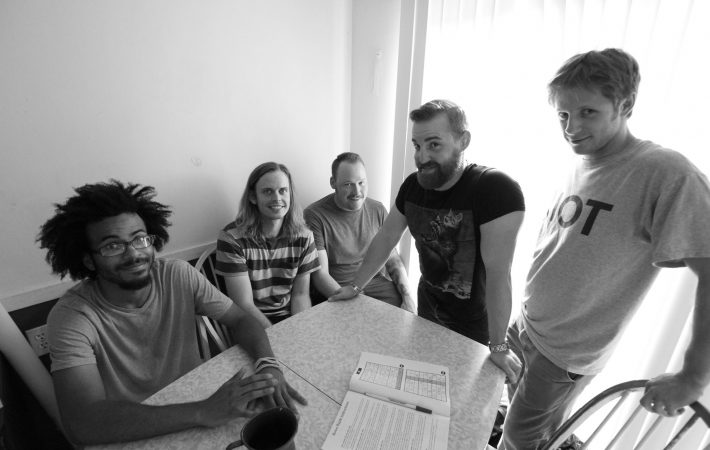 Q&A with The Landmarks

The Landmarks are a five-piece band, calling Ann Arbor, MI their home. They just recorded their EP “Challenge” in an old church near an abandoned train station in Detroit together with Gordon Raphael, former producer of The Strokes and Regina Spektor. While I often just skip over name dropping, ‘The Strokes’ (huge fan here) got my attention and so I started to listen to The Landmarks’ songs on SoundCloud and have done so repeatedly.

The album is fantastic! The song writing, the arrangements, the whole feel of it. Laja’s vocal chops are unique and reason alone to kind of fall in love with the band, if it was not for the clever songs and crisp and melodic guitar work as well. The Landmarks are a band to watch out for, because they could (and should) become “the next big thing”!

And so it was a no-brainer to ask The Landmarks if they would be up for a Q&A session with glamglare and they were! Thanks so much Jack for your time and your answers.

What was the last song that got stuck in your head?
I think for most of us it’s “Burn the Witch” by Radiohead. We were really excited when it came out and we’ve been listening to it non-stop. It gets better and better the more we listen to it.

Your name “The Landmarks” begs the question: favorite landmark(s) in Ann Arbor?
We would all probably have a different answer but as a band it’s probably the U of M Diag. We’ve practiced and busked there many times and it’s a blast, especially during the school year when lots of students are around. The State theater is also really cool.

Since you recently visited New York, favorite landmark(s) in New York?
Based on our first trip to New York, we’d have to say Central Park. We had a blast playing a stripped down set there during the day. We got a great response and met some cool people. This kid with a “Save the Bees” hat even sang with us. We also really enjoyed Ludlow Street. We played at Pianos and it was great hanging out there all day.

If I was about to visit Ann Arbor, which music venue would you send me to?
The Blind Pig. It’s a pretty historic spot. Nirvana and Pearl Jam used to play there when they came through Michigan which is cool. We always dreamed of playing there when we first started, so it’s cool that we play there regularly now. It’s the only venue of its kind in Ann Arbor.

Is there a song you’d like to cover?
We’ve covered a bunch of songs and bands including Talking Heads, The White Stripes, Nirvana, Weezer, The Strokes, and The Mama’s & The Papa’s, but we’re really looking forward to covering “Changes” by Bowie for a friend’s wedding.

What’s your songwriting process like? What comes first, melody or lyrics?
Well the music always comes first, whether it’s a specific person’s song or a full collaboration. Most of the time one of us records a demo on the computer and then we start playing it at practice. Laja starts with a melody and then writes lyrics. Each song usually takes a really long time haha.

If you could choose to live in a decade (music, style, etc.) Which would one would it be?
That is a really tough question but a good one. We are into so many different bands/music styles from the past. We also love all the clothing. A few of us would say the 80’s but definitely not all of us. 80’s music in general is a huge influence.

Thanks again, Jack and Laja, Colin, Martin and EJ – so inspiring! Can’t wait to hear more from you guys.

If you’re at all looking for any The Strokes “sound-a-like”, then my pick would be “Trapped”, yet… all comparisons aside, The Landmarks sound as fresh and original as it gets. And this is one stellar song, listen to it now: