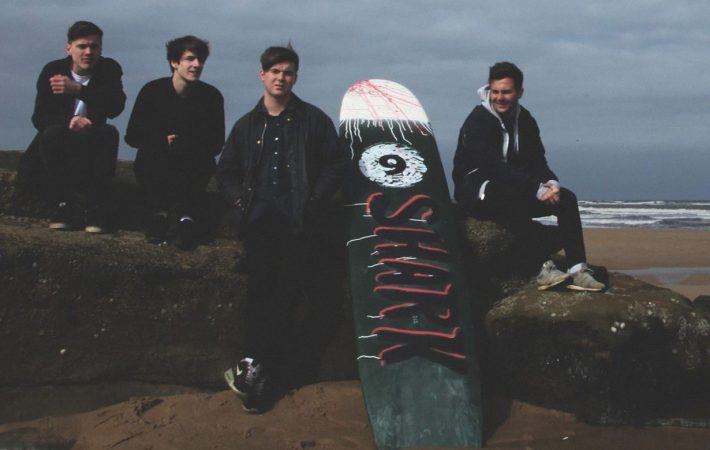 Earlier this year, I came across “Vice” by Lisbon, loved the song from the spot and made it our Song Pick of the Day! Still one of my favorite feel-good-tracks of 2016, I got more curious about this Newcastle four piece. With a brand new single under their belt, the more serious, yet in typical Lisbon style infectious “Shark”, I was wondering whether Lisbon would be up for a Q & A session with glamglare. Much to my delight, lead guitarist Joe Atkinson took the time to answer our questions. Thanks so much Joe, this is ace!

What was the last song that got stuck in your head?
Come to L.A by Pretty Sister.. had it on this morning the funk is real.

Do you have a “go-to song” from your childhood, one you always enjoy to hear again?
Yeah pretty much anything from ‘Whatever People Say I Am, Thats What Im Not’ – Arctic Monkeys, my favourite track off that record is ‘The View From The Afternoon’ I remember seeing the music video for the first time when I had just started middle school (year 5 to be exact) I was obsessed with the sonics of it all, it really inspired me.

What was the first album you have ever bought? And on which medium: digital, vinyl, CD or cassette tape?
The first album I ever bought was actually a compilation of The Clash on CD, ‘The Essential Clash’ it was called, I bought it when in middle school. My uncle used to have loads of cassette tapes of The Clash and he would play them to me whenever me and my family went down to Wales to visit them and I was pretty much obsessed with Joe Strummer, so I went to buy something for myself so I could listen at home and thought ‘The Essential Clash’ was the best option.

Is there a song you’d like to cover?
We’re not really into covers to be honest with you but if we ever took the plunge I’d probably like to give George Benson – ‘Give Me The Night’ a go, we l love that track.. we used to walk on to it when we played live but then ikea or some furniture place nicked it for their tv advert, we didn’t want people thinking we were creating the ikea advert live so we thought it was best to change it.

What’s your songwriting process like? What comes first, melody or lyrics?
It varies really, sometimes (Matty) Varty (singer) will have an idea and then we’ll take it to my laptop and finish the song from there or sometimes I’ll have an idea on my laptop and I’ll play it to Varty and he’ll take it away and write the lyrics and top line. Then there’s other more sporadic moments where we’ll just jam wether it be in practice or soundcheck for like 20 minutes straight and something will come from that. I think it’s really cool that we don’t have set rules or regulations for our songwriting it allows us to be creative at any given time really and thats a wonderful thing.

Playing live, what has been your favorite venue so far? And why?
A: Our favourite venue is KOKO in Camden London, we’ve played there 3 times now and every time its gets better and better. The room is amazing, it looks like an opera house turned into nightclub/venue type thing, it’s really cool. We’ve always had amazing receptions in that place so it’s quite special to us.

What’s the most bizarre thing to happen while you were onstage?
A: Probably when we played our local club in Whitley Bay for a christmas show at the end of 2014, all our mates were there who we hadn’t seen for ages and everyone was just going mad for it. Mid show this one guy stood on his mates shoulders and I just remember seeing the bouncer like rugby tackle/superplex him, it was like something off the WWE. Anyway we all started kicking off at the bouncers but they were having none of it and they were gonna pull the plug on the whole thing so we had to get everyone to calm down. It was just weird seeing it from the stage it almost didn’t look real, I was chatting to the lad after the show and he was laughing about it so everything was all good in the end.

If you could choose to live in a decade (music, style, etc.) which one would it be?
A: Probably the 70s the music was just too good Fleetwood Mac ‘Rumours’, Pink Floyd ‘Darkside Of The Moon’.. two records we’ve played countless times driving up and down the country.

20th May, The Great Escape, Brighton

21st May, The Great Escape, Brighton

23rd May, The Maze, Nottingham

… to make up for the time until you can see Lisbon live, or for those of us who can’t, here’s the soulful video to “Vice”: