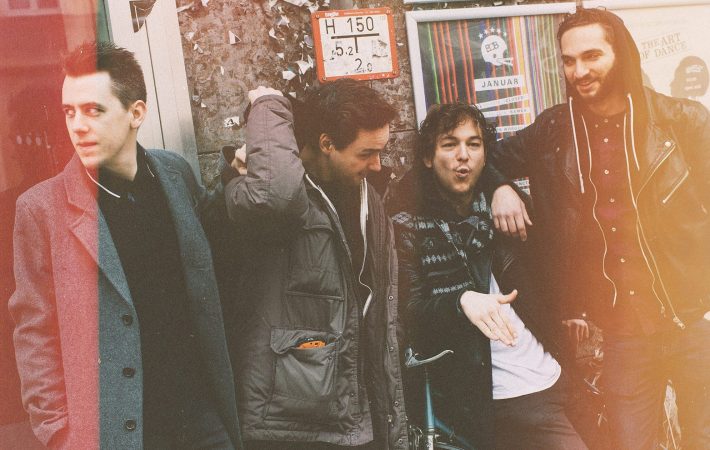 After premiering KYTES‘ new video “I Got Something” last week on glamglare, I am thrilled that the hottest band coming out of Munich, Germany right now took the time to answer a few questions in our new Offstage feature. The four indie-rocker just arrived back home from touring Europe and also playing the maybe most prestigious (industry) music festival, South By Southwest (SXSW) in Austin, Texas earlier this year. Since I not only became a big fan of KYTES, but have been to SXSW myself as well, our Q & A runs mainly around this but there’s more! Let’s dive right in:

What was your most memorable moment during SXSW 2016 in Austin?

The most memorable moment during SXSW 2016 in Austin was definitely at our last show at the Esther’s Follies. During our second song, people started dancing and heading to the front of the stage. The crowd was really awesome. They danced trough the entire set and even sang along to songs, they had never heard before. It’s hard to explain in words. We all had goosebumps at one point into the set. At that moment you forget everything around you and just live for that moment, hoping it never ends. But there were quite a few memorable moments, where we realized “Okay we’re 6000 miles away from home – this is really happening!”

Did you have time to see some other acts?  If so, who were you most excited to catch live?

Yes we had some time to catch other acts! Honne, Eliot Sumner, Santigold, Poliça and Everything Everything were amazing! We also enjoyed SBTRK, who played an awesome set at the Hype Hotel. Michael also caught Hinds play. Thommy, Kerim and Tim saw The New Regime.  Our favourite venue was the Hype Hotel. We also saw Gallant playing there which was awesome. Unfortunately we missed Chvrches, Jamie XX and Crystal Castles.

SXSW in Austin is different from big music festivals as bands play in lots of different venues and audiences change venues frequently too. This can be rather stressful…

Yeah it surely can be, but we were lucky to have a great team around us. Our tour manager Wyatt was at SXSW for 10 years in a row and we also had a really fun and cool driver called Joey. They helped so much. It was cool to play in different venues, from outdoor festival-like stages to small bars and clubs. We definitely had the time of our lives and it was worth every single stressful minute. SXSW in general is totally different from other festivals. The city is on fire for a week, there are more than 2,000 acts playing in bars, clubs, outdoors… we even saw a band play on a stage in a backyard.

What song(s) would you like to play if you’d get asked to play at the Oktoberfest in Munich?

Oh we’re not sure if we’re the right band to play at the Oktoberfest. But if we had to, we’d play songs which are easy to sing along and dance to.

“I Got Something” is a super catchy song, a classic “ear worm” as we’d say in German, and it plays repeatedly in my head. Which song stuck with you lately?

Thanks so much! There are a couple of songs… “Unforgettable” by a cool artist called Nvdes. We discovered this song while working on a new song in Vienna. We also really dig “Lovesick” by Mura Masa and there’s the new blink-182 song “Bored to death” we really enjoy. We grew up listening to blink and their new song is awesome!

Haven’t really been to Munich in quite a while but will be there in June. Where would you send me to experience some interesting (local) music? Which venue?

Oh we would have sent you to the Atomic Café but unfortunately it closed down 2 years ago. But there are still a few cool places like the Cord Club, or Strom where you can watch local and international bands. We saw Honne and Everything Everything at Strom a few weeks ago and the shows were great!

You are on tour throughout the summer. Do you have something like a “ritual” or something you guys like to do before a show that you’re comfortable to share?

A real weird ritual we tried to establish was brushing our teeth before going on stage to feel fresh, but we haven’t done that in a while. We do have this ritual though like a football team, where we come together in a circle and shout out a few words together.

Thank you so much Michael, Timothy, Kerim and Thomas for your time, and your wonderful answers. This was great fun!

Get “I Got Something” on iTunes.

KYTES will also appear at a series of festivals this summer including MELT! Festival and Dockville in Hamburg.