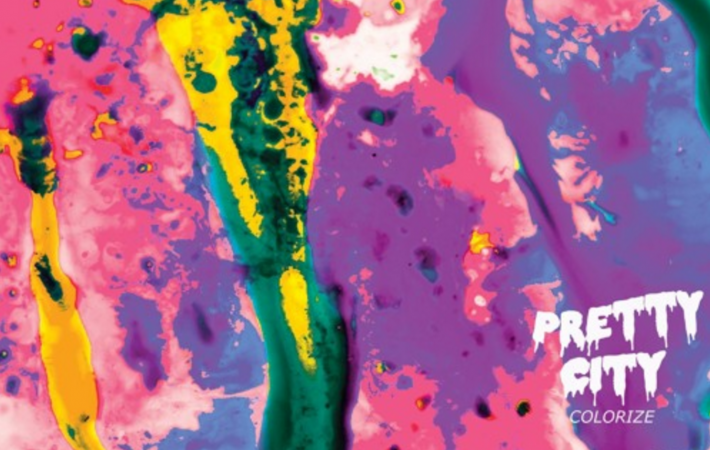 “Colorize” is the perfect title for Pretty City‘s debut album. It’s like splattering  different shades of color, like musical sub-genres of indie rock onto  different songs. When I first heard of Pretty City and listened to their single “Melt”, I was instantly hooked, so much so that I made “Melt” Song Pick of the Day.

In consequence, I listened to Pretty City’s entire SoundCloud catalogue and loved what I heard. Having seen this Melbourne three-piece at this year’s SXSW festival not only once but twice, I know that they are amazing live. I wouldn’t want to stop at two live shows only but with me residing in Brooklyn and they on the other side of the globe, it’s kinda hard…

Pretty City explore on “Colorize” different facets of “fuzz-rock”. At times, a track is sweeping in glorious psychedelia like “Melt”, then it’s less fuzzy like in “Fun Machine”  or more edgy rock like in “Running Around”. Clearly, Hugh Matthews (guitar vocals), Johnny Rock (guitar, vocals) and Drew Schapper  (drums) enjoy to take cues from styles they like and create their very own sound. From the start with “Melt” to track 11 with “Ignoring My Friends”, the album has a beautiful flow and rhythm to it.

“Colorize” is an album for fans of real, honest indie rock music. Music with melody and heart. Music with meaning and soul. That’s what this album is.  For a debut it gets as good as they come and we will cherish this one always. Get it on iTunes.

Listen to “Leave It Alone”, aside from “Melt” and “Running Around” another stand-out track and instant favorite:

Pretty City are one of the hottest bands to come out of Melbourne this year. Hands down! See them LIVE if you have the chance: