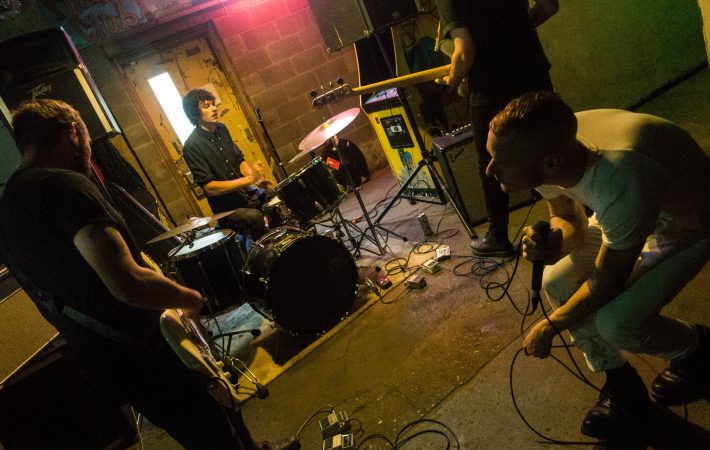 Eventually, I would have heard of Gold Class from Melbourne, Australia anyway and listened to their gripping 2015 debut album “It’s You“. Luckily, I stayed in Austin for SXSW 2016 a day longer and ventured out to a music filled afternoon too see Heaters grooving at the floor ‘stage’ and later, Fews taking on the ‘bigger’ stage but in between played Gold Class and it became immediately and without a doubt clear that this show would be nothing short but breathtakingly amazing!

At this point, I haven’t heard anything by Gold Class but a band with a classic configuration aka guitar, drums and bass and a singer who focuses on exactly that… in a way, this became rather rare and special. There was hardly any space for Adam Curley (vocals) to wander around, which he likes to do. Mark Hewitt was squeezed in the back, hitting the drums, Evan James Purdey shredding the guitar (such a joy to watch him for a guitar lover like me) and John Shub played the bass, skillfully so.

Being squashed on such a tiny, not really existing stage, Adam at one point hopped up onto the bar which made for an especially intense moment. Aside from the inspiring live show, so passionate and strong and in every sense ‘live’, it’s the music that makes Gold Class ultimately such a riveting, intense post-punk act.

While I try to be careful with superlatives, because how can you boil down 45 live shows to “THE ONE”, Gold Class are easily among my favorite top three of the whole festival.

To put this statement to the test, I immediately bought tickets for the Gold Class show at Brooklyn’s Palisades and was once again in awe how fantastic this band is!

In our chat later on, I learned that the four liked the Beerland show for basically the similar reasons why I liked it so much, despite having played literally on the floor with no stage. For a Sunday night, Palisades was nicely visited, but I’m leaning myself with confidence out of the window and predict that bigger concert venues will be on the horizon for Gold Class very soon and those of us who saw them early on will cherish the experience.

On top of creating compelling music, and delivering an intense show, Adam, Mark, John and Evan James are super friendly guys, who took the time to chat with us about Australia, Melbourne in particular, the music scene, touring, Europe, coming from different cultures… and what fans and bands like to talk about…

If we’re lucky, we’ll be seeing Gold Class again for CMJ and  a little US tour maybe. In the meantime, catch them where you can and browse our photos.

(Click on a thumbnail to start the slide show.)

(Click on a thumbnail to start the slide show.)

Watch the stunning video to “Life As A Gun”:

Stream the album on SoundCloud, and because you’ll be hooked, get it on iTunes! Listen to another one of my favorites, “The Soft Delay”:

Go and see Gold Class live when they’re in your town, stay connected on Facebook for updates:

There’s yet another cool band video for “Bite Down”: