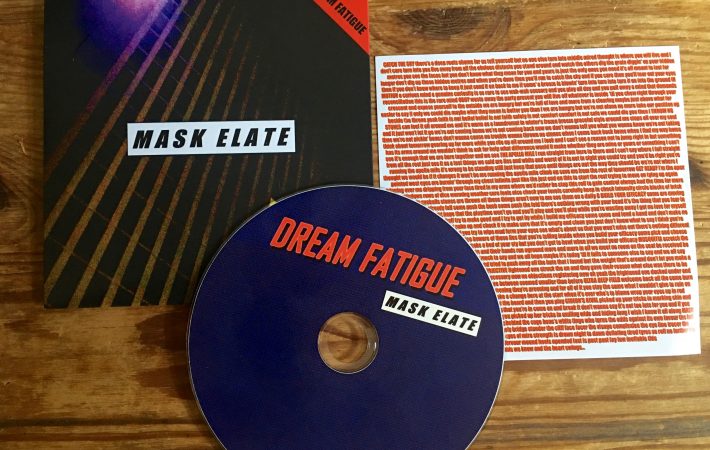 There is something exciting and special and even a bit intimate about debut albums… after all it’s the first time a musician or a band have bundled all their songs onto one record, ready for the world to listen. It’s no different for Dream Fatigue, who recently released their debut album “Mask Elate”, which holds 12 beautifully crafted alt-rock songs.

As with the debut albums of some of my long time favorite (and super famous) indie-rock bands like U2 (“Boy”, 1980),  Placebo (“Placebo”, 1996), The Strokes (“Is This It”, 2001) or Kings of Leon (“Youth and Young Manhood”, 2003), the first record is more raw, more direct, less polished and simply ‘fresh’.  Listening to such an album is exciting per-se. I like it when not everything is polished to perfection, which can be easily so boring.

Dream Fatigue are Zeb Durrant (vocals, bass), Max Durrant (guitars) and Nicholas Woods (drums, vocals), calling South Gipsland, near Melbourne, Australia their home turf. From my email conversation with Zeb I know that while he’s the man behind the bass, the appealing vocals and the lyrics, his brother is the one who writes the music,and their best friend since early childhood, Nicholas, is the band’s drummer and together they’ve been making music for several years and put the result of it on their first record.

All 12 tracks on “Mask Elate” are solid rock songs with an overall pretty 90s rock music vibe. More specifically, I’d say I get the vocal tonality and playfulness from early Incubus and the driving beats and ‘rockness’ of Foo Fighters.

Best, you follow Dream Fatigue on Facebook and get the album on iTunes. To get an idea what you’d be in for, listen to some favorite tracks now:

“Mosquitia”, the 8th track on the album, starts out softly, only to pick up speed after a few bars in, to get slow and gentle again half way through. It’s a beautifully melodic song and the (acoustic) guitar work and vocals on that track are my favorite.

A little funky, with defined bass lines, “Throw No Stones” is another little gem on Mask Elate. It has a perfect flow to it with quite a catchy chorus. Listen:

Thank you, Zeb and Dream Fatigue for having provided glamglare with a physical copy of the album. Being able to hold music in your hands is amazing, even more so when it comes from so far away!