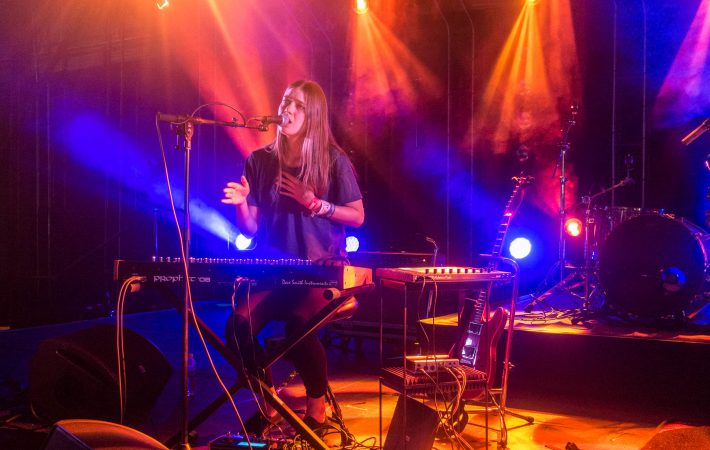 Day 5 at SXSW: the health and energy levels are on  decline, so we were lucky that our Saturday schedule was a somewhat easy one. We started off with a breakfast at the McDonald’s Loft, where we were looking forward to some chicken McNuggets and a BigMac. But apparently that is so yesterday: McDonald’s now wants to champion healthy food and asked us to build our own burgers on a touch screen, which came in more sustainable presentation too.

From there we went to the Hype Hotel to see Morly, a very exciting new artist based in L.A. You could think that, like the Overcoats the other day, she infused traditional songwriting with sleek, minimal electronics and beats. But it was the other way around: she started as a producer and added her beautiful vocals later for her second EP, “Something More Holy”, out on April 8th. Update: More Photos.

The Pandora Discovery Den is another “festival in a festival” at SXSW, directly across from our hotel, which means that we hear a lot of their programming if we want to or not. This year we decided to actually go inside and we were lucky to see most of the set by Bleached, a  dynamic rock three-piece (four when playing live) from California.

Next station: The Sidewinder which hosted the Double Dutch Party. We saw New York band Mainland, who do straightforward mainstream rock. We had seen them around before at the festival and in New York, so it was good to see them in action again. Update: More Photos.

Next up on stage, the electro folk band Freedom Fry from California, who take a curious collection of instruments on stage to supplement the sequences from a laptop.

Originally I wanted to see Pastel Ghost, but that was on the other end of town and she is Brooklyn-based, so there will be hopefully another opportunity soon. Instead we took advantage of the venue right here in our hotel and were absolutely stunned by Chaos Chaos, a sister duo, also based in Brooklyn. They play electro pop on keyboards and drums and their joy being on stage easily overcame the awkward surrounding of a hotel bar (at one point singer Asy pointed out that we should all have a tequila shot, which seemed apt for the venue).

And that’s the official wrap-up for SXSW 2016. Today, on Sunday, there’s more music to be seen, and we’ll catch a few favorites but mostly we hope to relax.

Thanks for following along!