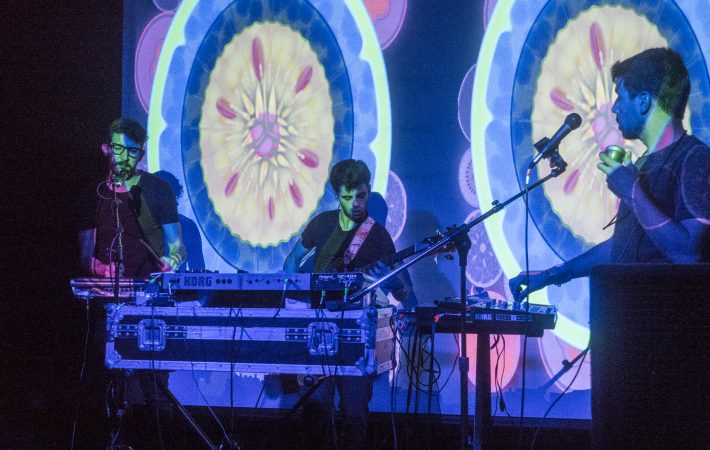 On day 4 of SXSW we could use the wakeup call provided by Pretty City who opened The Aussie BBQ, which presented an astonishing lineup of up and coming bands from Down Under.

We could have stayed the entire afternoon to see artists like Julia Jacklin, Big White, DMAs and many more. But we needed to head off to a panel with NPR All Songs Considered host Bob Boilen and Wall Street Journal editor Jimmy Fusilli.

On the way back we stopped again at the Aussie BBQ to see a few songs by [Methyl Ethel(http://www.methylethel.com/) another Australian band on the way to stardom.

Over at the Fader Fort we saw a few songs by White Lung before heading back for a dinner at Moonshine Grill. A major thunderstorm was brewing and we were lucky to be in safety when the rain came down. The heavy rain though caused changes in the schedule, that’s we could see a set by California singer/songwriter Monogem.

Next up, New Myths from New York, another must-see three-piece on our list: New Myths are always a delight to experience on stage. Their debut album was released in 2014 and I hope that they put out new material soon.

Portuguese electronic three-piece Holy Nothing played at The Hideout on Congress, which is a music venue turned movie theater. The location put a limit on what they could do on stage, but it worked very well. We loved it! Update: More Photos.

The last show of the evening happened again at the Lucky Lounge. The San Francisco duo Inhalt were playing their dark wave synth pop in front of a frantically dancing crowd. They take not only the German lyrics as cues from the “Neue Deutsche Welle”, but Elke and I could not come up with a band who actually did this kind of music in the 80s. Great music, great energy.