Ibeyi at the Technikum, Munich 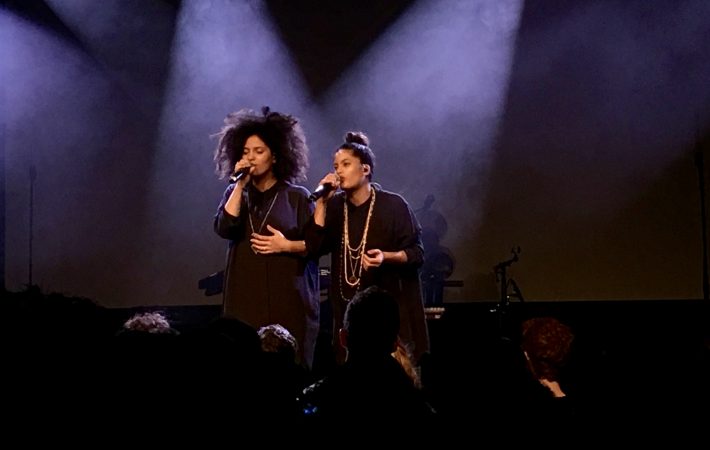 Ibeyi at the Technikum, Munich

In case you haven’t counted, this was our fifth Ibeyi show this year and once again in a new setting: a concert venue in the doomed nightlife paradise of the Kultfabrik (it gives way to a major new development next year) in our old hometown Munich. I wish I could say we intentionally traveled there to celebrate the Díaz twins’ birthday, but it was just a lucky coincidence of being at the right place at the right time.

After a quiet set by Gwilym Gold, Ibeyi came on and they were greeted by an enthusiastic Munich audience with a collective Happy Birthday singing. After that Lisa and Naomi led us through all 14 songs of their self-titled debut album, plus two new tracks and a sing-along version of River. At the end, they were presented with a small birthday cake (21 candles don’t take so much space) and another chant from the audience while their mother and manager was filming on her iPhone.

Watch Ibeyi celebrate their birthday and sing River together with the audience:

We didn’t bring the camera, but here are some shots with the iPhone:

== All concert photos by glamglare.com – © Elke Nominikat and Oliver Bouchard ==