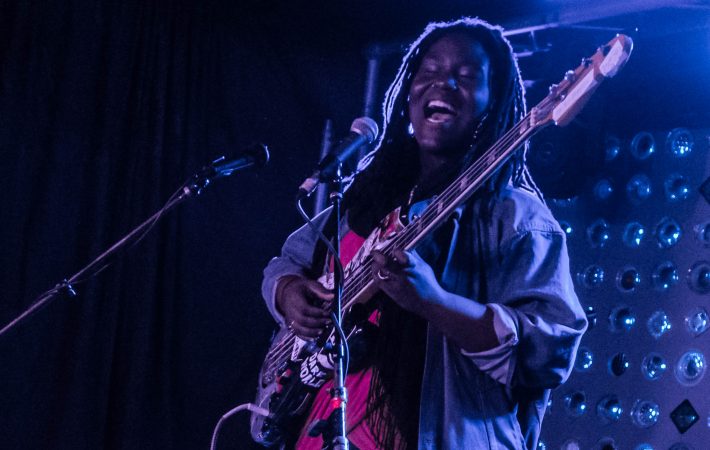 I’m a big fan of daytime shows: it takes away the big event component and puts the music itself front and center. That’s why I was excited to hear that our big sister blog Audiofemme puts together a holiday show at brunch time.

The line-up started with two husband and wife duos: first up was Letters to Nepal. No matter that we’ve seen them many times before, they again surprised us with some new elements. They lost their pianist and replaced her with a theremin, that fancy instrument that allows creating sound by moving ones hands through a electromagnetic field. This can be gimmicky, but for them it works as a great addition to Anton Fadeev’s sick beats and Evgeniya Kuznetsova’s etheric vocals.

There was a perfect segue from Letters to Nepal to the next band, The Rungs: guitarist Diwas Gurung is actually from Nepal. Musically, they also blend nicely: The Rungs add two guitars to an electronic backdrop for upbeat, catchy songs that veer between new wave, synth pop and melodic rock.

Next up on stage, alternative rock quartet Marigolds. With the classic set-up of vocals, lead and rhythm guitars, bass and drums they steered the afternoon further into a indie rock direction.

We have seen Gold Child the first time at CMJ, when they performed one of their first shows. Since then their show has become a much rounder experience and now includes a cover of Mazzy Star’s hit Fade Into You, a perfect fit. But their upcoming debut single Tides is hard to get out of your mind in its own right.

Closing out was Mal Devisa from Massachusetts, a one woman powerhouse playing bass and a kick drum. Having her loop pedal broken just emphasized the raw energy of her music that gave everybody in the room the chills.