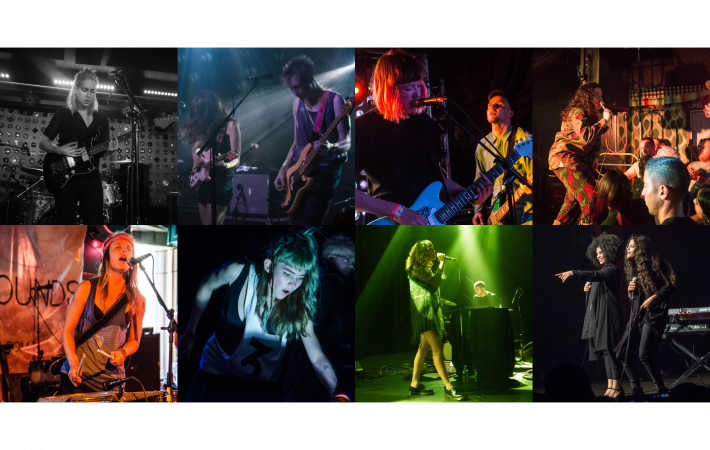 It is time again to present my top ten favorite albums. In 2015, like in previous years, there was again much more good music that fits into a single list and looking at the selections of fellow blogs confirms it: what is the number one on one list sometimes doesn’t even make it into the top 50 of another. So there is a good deal of randomness to it and that makes it even more fun.

I selected my top ten unscientifically, just by what I feel had the most impact on me. Naturally that favors new or newly discovered artists, but so be it. Here we go:

Live, MacKenzie Scott comes over with such a mesmerizing intensity and much of that translates in to her recordings as well. Her second album contains nine strikingly personal songs and each of them can leave you pondering for days. (Live Photos | Review | Apple Music)

It’s hard not to like Wolf Alice, a London four piece, who took the indie world by storm this year. There’s great song writing, a charismatic frontwoman and music that hits the sweet spot between rock and pop.
(Live Photos | Apple Music | Review | Spotify)

Live, Dilly Dally is a very intense and charismatic band and not much of that goes lost on their debut album Sore. The unique way Katie Monks growls through their songs, accompanied by noisy and angry guitars is a special experience.
(Live Photos | Apple Music | Spotify)

Georgia is a new artist from England who fuses together various musical styles into something that is uniquely her own. Her album is electronic, beat-driven and incredibly catchy. On the record she does everything herself, while on stage she’s supported by one or two musicians, which allows her to go crazy. (Live Photos | Apple Music | Spotify)

This album has been a sleeper hit at glamglare since its release last spring. The California quartet’s shoegaze guitar layers and Emma Ruth Rundle’s dramatic vocals make for riveting and catchy music, which makes their songs end up in our playlists again and again. (Apple Music | Spotify)

I have been a big fan of Brooklyn artist Idgy Dean since I saw her performing at SXSW this spring. Her unique style of looping drums, guitars and vocals into rich, psychedelic songs works great on her debut album as well. (Live Photos | Apple Music | Review| Spotify)

Grimes is back after three and a half year and she hasn’t lost her edge as the most interesting pop star around. That is enough to celebrate by listening to her fourth album on repeat. (Apple Music | Review | Spotify)

We have been waiting for Lorely Rodriguez’ full-length debut for like, two years and I’m happy to report that it is a beauty – not only for her clear and powerful voice, but also for the artfully laid out synth textures. (Live Photos| Apple Music | Spotify)

It makes me wonder why on one hand there is an album like Adele’s 25 that people fall over each other to buy and then there is Inevitable which keeps such a low profile that there is not even vinyl available. Musically, this is not justified at all: Natasha Kmeto lays out ten wonderful tracks, vignettes about various stages of love relationships. She accompanies them with synth layers that are sometimes somber and dark, but then sometimes soar up to almost to dance music territory. (Apple Music | Spotify)

When this album came out last January, I was already almost dead sure that it will be on top of my year end list, simply for the impact the Díaz sisters’ debut album had on me. There were some personal reasons why it resonated to much, but I also found it musically absolutrly brilliant: my favorite music doesn’t normally contain any of Ibeyi’s main ingredients: hip hop beats, jazzy piano lines and African chants. But fused together and topped with Lisa-Kaindé’s and Naomi’s voices, I find it all simply irresistible. (Live Photos | Review | Apple Music | Spotify)