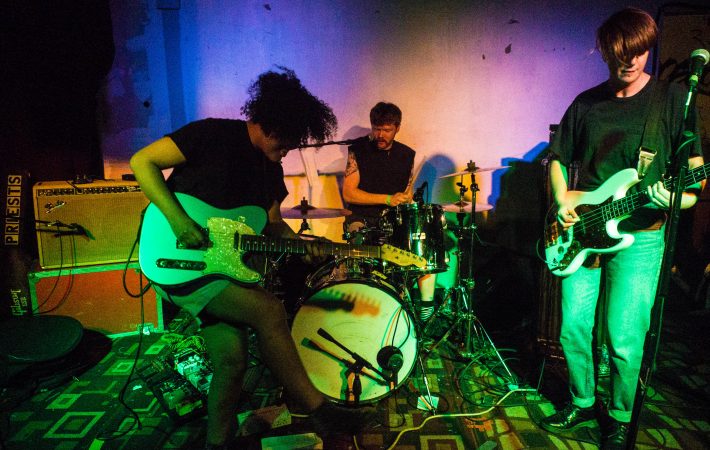 “Billy Easter, she’s so rad. Don’t know how she’s doing it but she’s awesome! And I am a bass player too. Loved the show!” the woman next to me at Sky Town bar enthusiastically explained when I asked her about her favorite moment of the show that has taken place earlier that night at Brooklyn’s Palisades.

The band in question, Shopping, was ending their US tour at the pretty much sold out Palisades, before heading back home to London and touring the UK a bit. Early in their US tour though, Andrew Milk (drums, vocals), Rachel Aggs (guitar, vocals) and Billy Easter (bass, vocals) played a (free) CMJ show for the Brooklyn Vegan at Baby’s All Right and if that completely packed show was any indication, the one on Saturday promised to be well visited too.

No wonder! What Shopping put on stage is one energetic, richly entertaining AND high quality live show. The many photographers in attendance, some with really heavy gear, further supported the notion that this was a show not to be missed. There was a little stage banter, but mostly the band having fun with each other or with their touring band members and otherwise focusing on performing their well crafted songs with a really interesting mix of who sings when and what, reminding me faintly at times of Sugar Cubes or B-52s (minus the 60s vibe).

Get an idea of Shopping’s really cool live show by checking out our photos and watch a live video:

There’s a great live video for For Your Money from FatCat Records:

… and since we’re on it, listen to the super cool Straight Lines too: