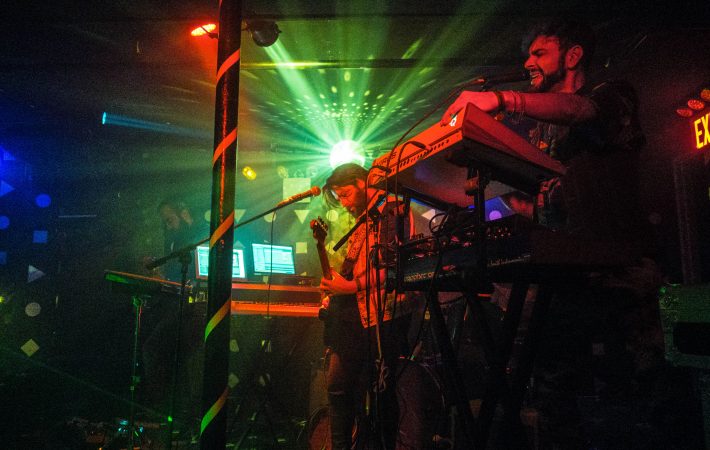 DF3, a synth pop trio from California via Mexico and Brooklyn, were scheduled to play two shows for CMJ 2015, both at equally intimate dance clubs on the Lower East Side. First up was their show at Leftfield, which I decided to catch. Two days later, a show at Fat Baby was up and those who were there were equally lucky, because DF3 is a band that already did play and will continue doing so, huge venues.

Playing a music festival, be it SXSW or CMJ can be tough, because you’re working against the clock all the time and the more tight knit your set-up, the better. And time was definitely not the friend of Lino, Coa and Joe that night, because they ended up playing only four tracks due to the strained schedule.

But hey, it’s not always The More, The Merrier, but I much rather prefer Quality Over Quantity! And what we heard that evening at Leftfield was modern synth pop at its best, boasting with catchy hooks and dance beats. Also, there was luckily no time limit once the show was over and so I could have a nice chat with Lino and am looking forward to another show of DF3 – may I hope for next year?

While listening to Gotta Run, enjoy some colorful photos of DF3’s show:

– = All concert photos by glamglare.com – Elke Nominikat and Oliver Bouchard ==