PHOTOS: Jennylee introduces herself at Baby’s All Right 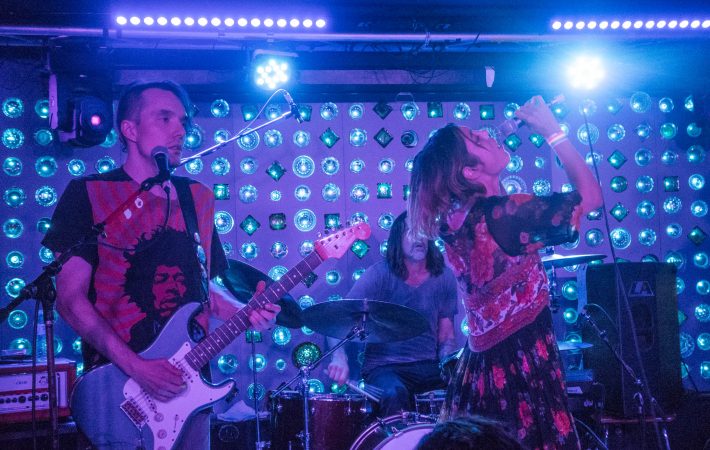 PHOTOS: Jennylee introduces herself at Baby’s All Right

Seeing an artist at her first show is a rare exciting event, so I’m happy that, after Mothica earlier this year, we had a second opportunity with Jennylee, the solo project of Warpaint bassist Jenny Lee Lindberg. And while she probably has hundreds of shows all over the world under her belt, standing alone front and center is something different than behind the two power frontwomen Theresa Wayman and Emily Kokal. So she was nervous and she admitted that. So nervous that somebody had to point out to her that she shouldn’t go down on her knees too often, because only the first row can see her there. Oh, well!

But then Jennylee went all the way to a true solo performer: she gave away the bass to a band mate and she even forfeited a mic stand. And she can perform. With Warpaint she comes over as at times somewhat aloof, with her eyes often closed while she slaps her instrument, but here she was fully present, vulnarable and charismatic. And that she’s a good singer we all have known since she so wonderfully contrasted in the harmonies with Emily and Theresa in Warpaint (the song) and there is of course CC on Warpaint (the album).

Musically she sounds exactly I would expect the bassist of Warpaint to sound: less guitar, more bass and lots of rhythm. A little bit rougher and less dreamy. She sounds fresh without denying the history with her band (which so far makes it very clear that it is still very much alive and kicking, despite the solo projects of its members).

Here’s the video for her lead single Never:

Jennylee’s album Right On is out on December 12th on Rough Trade. Can’t wait.