PHOTOS: Future Thieves put on one hell of a live show at Rockwood Music Hall (CMJ) 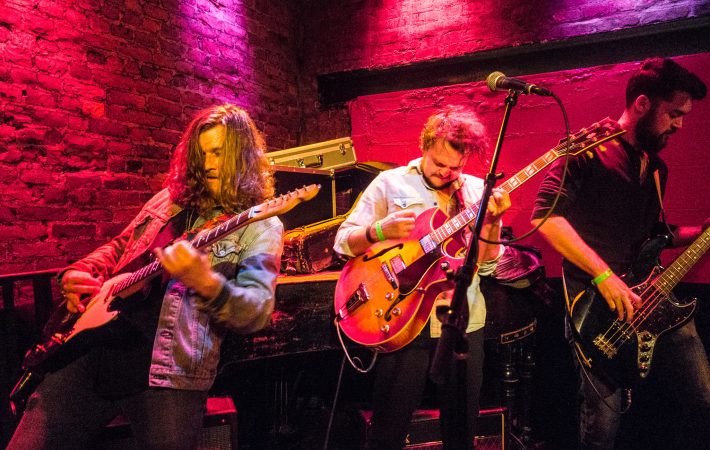 PHOTOS: Future Thieves put on one hell of a live show at Rockwood Music Hall (CMJ)

While touring the East Coast, Nashville’s Future Thieves also made a stop in New York City to play a show for CMJ. Friday evening, shortly before Midnight, Elliot Collett (vocals, guitar), Austin McCool (guitar) and Nick Goss (bass) took the tiny stage of Rockwood Music Hall 1 while Gianni Gibson (drums) took a seat behind the house drums on the ground floor, next to the stage. It might have been a rare occasion for Gianni to be so up and close to his fans.

But everybody who came out that night and brought the place to the brink of capacity, was near enough to have a good view and follow Future Thieves in action. It’s exhilarating to see musicians perform with great skill and joy, which makes for an extra cool experience.

Yesterday, Future Thieves celebrated the release of their debut album Horizon Line (more on this album to come shortly) at their hometown venue 3rd and Lindsley in Nashville, where we also saw them for the first time back in June (see our review here).

Follow Future Thieves on Facebook and/or Twitter, stream their music on Soundcloud and get the album Horizon Line. If you can, go see them live because…. this is music that sounds and looks GOOD: