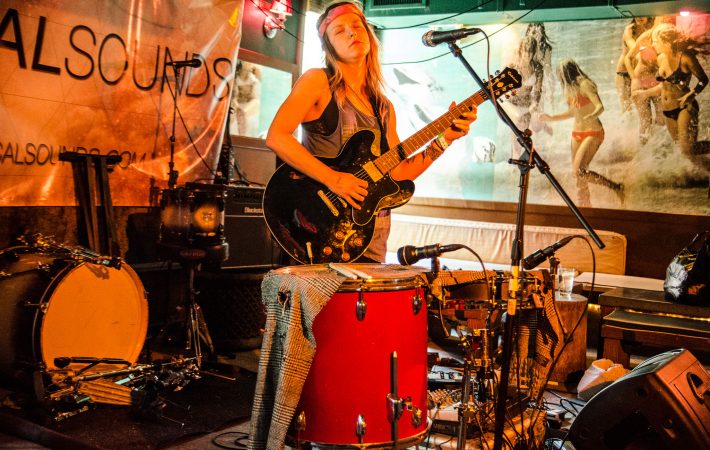 There’s no denying that we totally dig the music of Idgy Dean, who recently released her debut album titled Ominous Harminus (see our review here).

I was lucky enough to catch Idgy Dean play an early afternoon show, upstairs at Pianos for the Audiofemme and Atypical Sounds CMJ showcase. Seeing Lindsay Sanwald, who goes by Idgy Dean, performing live is a treat in itself. I don’t know any other (young) musician who has playing multiple instruments, looping and blending them all together so effortlessly down as Idgy Dean. She switches between playing stand-up drums and guitar and creates a beautiful, dreamy, beachy sound.

Having chatted with Lindsay after her show, and having learned about another one of her passions, surfing, I can hear that in her music too. Listening to a song like Inauguration for example, it’s easy to picture the ocean, with the midday sun standing high, throwing little strands of glitter onto the crashing waves, seagulls cruising… just ignore the lyrics for now and lean in on the rhythm, the guitar layers and Idgy Dean’s ethereal vocals

Get Idgy Dean’s entire album on Bandcamp (there’s even a limited vinyl edition!) and enjoy some photos from her mesmerizing show, while listening to it: