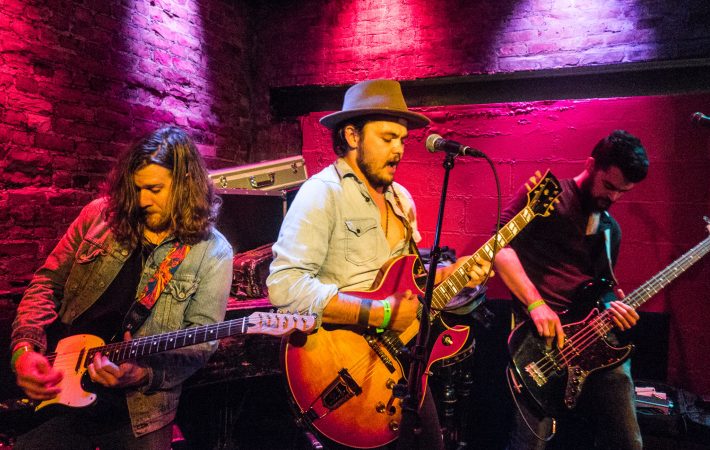 Things were heating up on Friday: Audiofemme and Atypical Sounds staged a massive day party at The Delancey. First up were Brooklyn art rock duo Of Clocks and Clouds, who released an excellent album last year and are working on a new one.

On the way too the beautiful rooftop at The Delancey, we passed Surf Rock is Dead a Brooklyn via Chicago and Melbourne duo, who give surf rock a new spin.

The palm tree jungle of the rooftop lounge was a perfect backdrop for Kat Quinn, a singer/songwriter from Queens with a set of beautiful, quiet songs.

Meanwhile, Wolkoff took the first floor stage, who provided one of our Song Picks of the Day. It would have been nice to stay a while, but downstairs we didn’t want to miss New Myths an exciting alternative rock trio from New York.

We took a little break, but were back right in time for an acoustic set by Gold Child, a New York three piece fronted by singer and songwriter Emily Fehler. It was a wonderful moment to wind down and reflect, before throwing ourselves into the evening activities.

Before that, there was another act not-to-be missed at The Delancey: L.A. artist Lena Fayre with a cool brand of electronic music, who may have played such small stages for the last time.

After the fun show of Boston three-piece Vundabar at Pianos, we headed over to Leftfield for a great lineup, starting with The Frail from San Francisco, followed by Spaces of Disappearance a Chicago songwriter and producer, who combines cool beats and melodies with a great voice. For me, one of the exciting discoveries of the festival.

My must-see show for the evening was Solvey back at Pianos, the alternative rock band of Jessica Zambri. Great show!

Meanwhile, one of Elke’s must-sees the Mexican-Californian electropop trio [DF3] was on at Leftfield. They overestimated the tiny venue’s ability to accommodate their complex setup, so their set was unfortunately cut short.

Lara Snow, who we saw on Wednesday night was next: we didn’t see her, but had a nice chat and learned that she will play another NYC show at Pianos next week on the 22nd. Don’t miss her.

Last show for the day was Future Thieves a southern rock quartet from Nashville, Tennessee, who crammed themselves onto the tiny stage of Rockwood 1. That didn’t keep them from having a lot of fun.