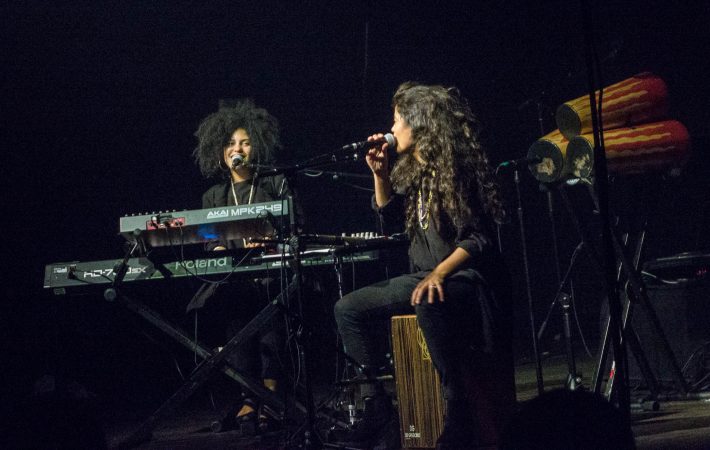 I fell in love with Ibeyi pretty much a year ago, when their name appeared on the first SXSW artist list. Since then they have released their full-length debut and have been touring the world non-stop, filling up bigger and bigger venues.

Their last NYC stop was a packed Webster Hall on Friday a week ago, playing for an enchanted audience, which broke out multiple times in spontaneous “Ibeyi, Ibeyi” chants. No wonder because, there’s little not to love about what the young twin sisters Lisa-Kaindé and Naomi Díaz are doing: they come over charming, vulnerable and truly delighted about an audience who is captured by their deeply personal songs.

It was interesting to see how they have grown as live performers during the last year. In particular Naomi, who used to be shyer one, takes now often the lead vocals and walks to the edge of the stage alone. There was this one moment during Exhibit Díaz, their Jay Electronica cover, when Naomi’s mic failed during Lisa’s part. Their stage manager was frantically working to swap it against a new one, and succeeded exactly at the right time for Naomi to sing the chorus: “I have something to say”. I’m sure she has now more to say and to contribute than in the beginnigs of the band and will share the writing credits with her sister for future songs, one of which the already played at the show.

From New York they went to Canada and then back to Europe where they continue their tour, including a stop in Munich, exactly at the time when we are visiting.