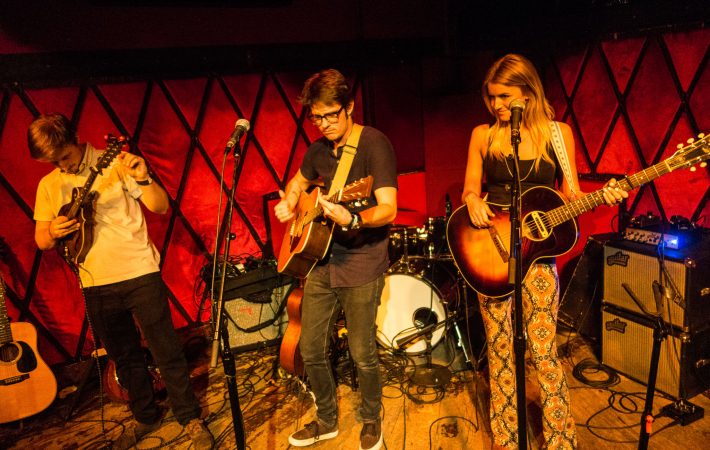 When I first listened to Fairground Saints‘ self-titled debut album, I was immediately hooked (see review here) and wanted to see this Californian three piece live. Luckily, I had to wait only a month, because they’re currently on tour with Striking Matches (review & photos to follow) and played a show at Rockwood Music Hall, the perfect venue for this kind of music.

While recorded, Fairground Saints included more instruments and embellishments, they presented themselves pretty much acoustic – well, yeah, the acoustic guitars were plugged into amps but that was that. No drums, bass, keyboards, synths or what not, but three Western acoustic guitars and Elijah Edwards also played steel guitar (lab style) and the mandolin at times. Mostly Mason Van Valin and Megan McAllister shared singing duties, supported by their Elijah Edwards of course.

Fairground Saints played seven songs from their album, with Can’t Control The Weather being second and California being last. Before they started to perfom Turning This Car Around, and Elijah Edwards exchanged his guitar with the mandolin, Meghan explained something like: “Since most of you just found out about us now, I’d like to give you a bit more background about us, They (nodding to her two band mates to her right) were on Facebook and they found me on YouTube and this was a match made in heaven”. True! It was an exhilarating, beautifully executed show. See and hear for yourself:

To get an idea what Fairground Saints sound like, watch this fun and sweet video for Can’t Control The Weather, their super catchy hit song – well, even if it is not yet played everywhere, it should and pretty certainly will be: