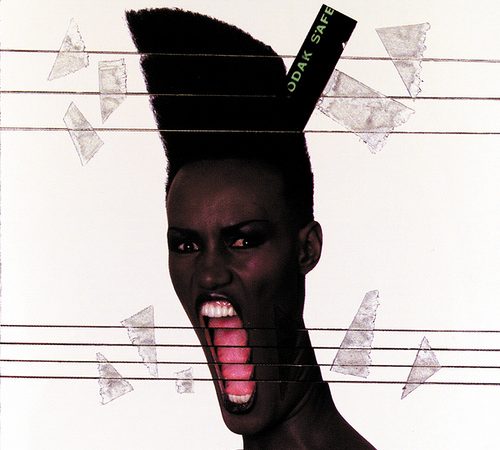 In 1985 I knew Grace Jones mostly of her role as a Bond villain’s right hand in A View to a Kill. When she released Slave To the Rhythm, I liked the song well enough to buy album, which is actually mostly different interpretations of the same song combined with some interview snippets and other sound bites. Also, Trevor Horn’s name is attached to it – the same producer who came to fame with fabricating Frankie Goes to Hollywood (in fact, I’m not surprised to read that Slave to the Rhythm was originally meant to be performed by Frankie) .

However, it’s an cool album nonetheless and some its tracks were staples on my 80s mixtapes. The opener Jones the Rhythm – full of pretentious faux drama – doesn’t bode particularly well, but then there is The Fashion Show, a wonderfully elegant variation of the theme, where Grace Jones’ deep voice alternates with bright background vocals. My favorite The Frog and The Princess, a recitation of a passage out of Jungle Fever by Jean-Paul Gaude set to an ominous electro beat, which I understood well enough to be utterly fascinated. The rest of the record spreads out more versions of the same theme, including the real Slave to the Rhythm.

Grace Jones has written her memoir and still tours. Amazing!

Here’s the weird video for Slave To the Rhythm: