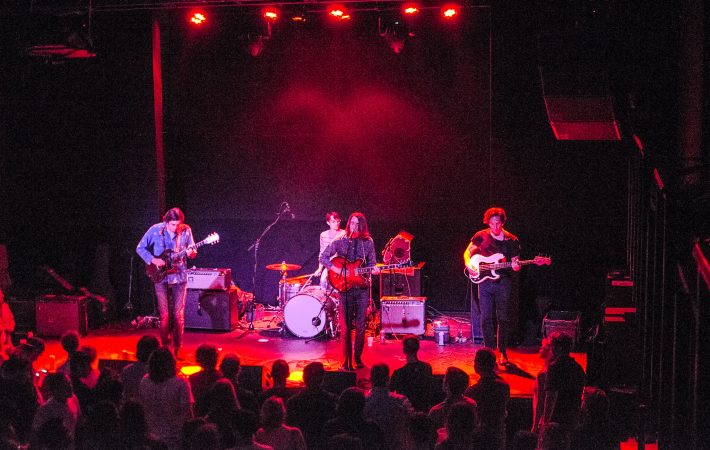 The opening band prior to Ultimate Painting didn’t set the bar too high, meaning I found vocals and lead guitar to be “off”. Maybe as the “middle” band their sound-check was limited, not sure. Their performance though was forgotten as soon as Ultimate Painting started with the title song of their debut album, which happens to be the band’s name.

The appreciate audience, was made up by a good 80% male fans in their mid 30s to 40s, who went along with Jack Cooper’s -charming, almost shy- stage banter. Two songs in, he tunes his guitar and addresses the fans with: “It’s good to be back again at the big easy” which got replied with “try again” and friendly laughter. He starts smiling himself and explains: “Well… it’s just… ‘Big Easy’ is our name for every big American city. Nah, really, it’s good to be back!” Later, he complemented an air-piano playing fan, and the band garnered a lot of affirmative cheers after finishing Central Park Blues.

Something I rarely notice at shows, they began playing Kodiak and had to start it all over again several bars in. “My bad” excuses Jack Cooper, no harm done, especially not since they played so well together and James Hoare was clearly killing it on guitar with his soulful and slick  guitar solos, while Neil Robinson and Anthony Cozzi remained more in the back, letting the two frontmen shine.

Yet even the best evenings have to come to an end, and so after nine beautifully executed songs, Jack Cooper once again took over the host duties: “That’s our last song. It’s a very long song though and we’ll be at the merch table for a meet & greet.” James Hoare let hear the first tunes for Ten Street and all four didn’t stop playing for a pretty long time. A truly great send-off into the night!

To get an idea of the great live spirit, watch this cool KEXP video:

Can’t get enough, then also try out this Chirp Factory live session:

Follow Ultimate Painting on Twitter, stream their music on Soundcloud, get their latest album and go see them live: