Empress Of gave a beautiful performance at Music Hall of Williamsburg, celebrating her debut album ‘Me’ 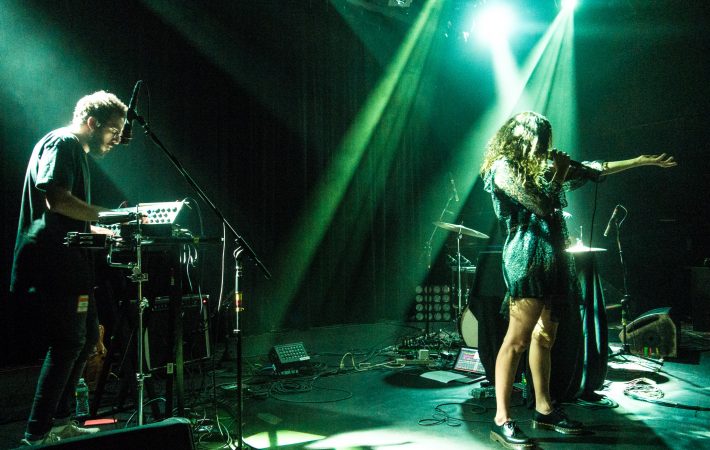 Empress Of gave a beautiful performance at Music Hall of Williamsburg, celebrating her debut album ‘Me’

It’s not the first time that I saw Empress Of. Not even the first time at Music Hall of Williamsburg. I saw her there already for the third time. And earlier this year at Elvis’ Guesthouse, last year in Austin for SXSW and in 2013 at Cameo Gallery for CMJ, which turned out to be our favorite live show of that year.

So, I knew -more or less- what was to happen. Nevertheless, the vibe last Sunday was a festive one, people were excited to be part of the long awaited party to take place. We came together at one of Williamsburg’s bigger venues to celebrate Lorely Rodriguez, who goes by Empress Of, debut album ME – an album that receives high praise all around.

As usual, Empress Of put on a beautiful, almost intimate and shy show. Only at the more up-tempo songs does she let loose, is dancing, shaking her long curly, hair. Her friends and fans who came out that late Summer night seemed to know all her lyrics, despite the album just having been released. There was a lot of co-singing going on around me. And after a good hour, the show was over yet the audience frenetically requested more of the good. Empress Of showed her mesmerizing smile once again, shrugged and excused herself with something like “I only have one album yet, guys. But I’ll be at the merch booth if you want to chat or so”…

… and that we did, happily!

The fourth track on ME, How Do You Do It,  is live as awesome as in this live-studio video! How Do You Do It could easily be Empress Of’s first super hit. It has all the necessary potential, it’s pop and powerful, it gets you on the dancefloor yet without all the sugary glue. This video is also a very special recording: look closely and see how many of the “background” singers you know… I recognized at least two, and it’s great fun to see them here lending their great voices to a fellow beautiful one. Watch this video now:

Released only a few days ago, the video for Standard, from Empress Of’ debut album. It’s refreshing to seeing a female artist not going the overly sexy, semi-violent or super obscure route but creating something tender and different. See for yourself: