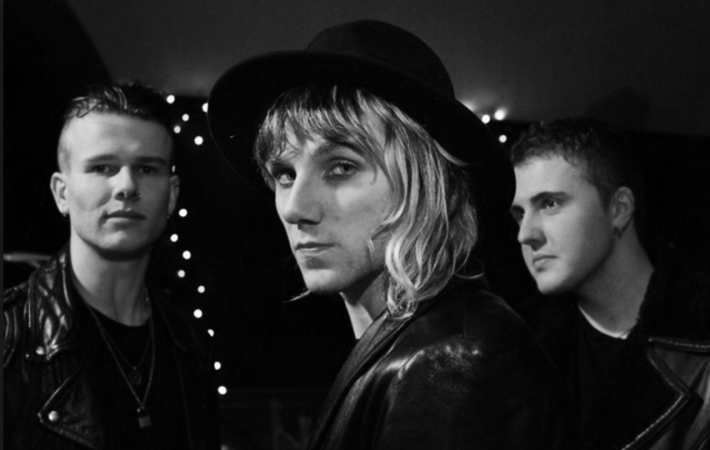 It’s easy to be honest here, Darlia got me at…  Darlia! I love the name, whatever its meaning, it makes for a memorable moniker, no easy feat these days. When I stumbled across Dear Diary the other day, I jokingly said to myself, “they better are a three piece” and lucky me, they are!

Darlia are comprised of Nathan Day (vocals, guitar), Dave Williams (bass guitar, backing vocals) and Jack Bentham (drums, backing vocals), based in London, UK and amassed quite an impressive fan base but that doesn’t come as a surprise! Darlia have been touring with Gerard Way (formerly My Chemical Romance) as well as The Wombats and also gained new fans at their gigs at the famous Glastonbury Festival or the Reading Festival.

After having repeatedly listened to the 8 tracks on Petals, released in February earlier this year, and some older material, I can’t help but feel occasionally reminded of two other famous three piece bands with a one noun name: the British one just started when the American tragically ended. I am thinking of Placebo, and I am thinking of Nirvana. And then, on songs like I’ve Never Been To Ohio or Candyman, I feel reminded of the best pieces of Oasis.

Darlia are neither just (post)-grunge nor are they psychedelic or alt-rock but they certainly have this uncanny knack for strong, catchy melodies in an overall great rock setting without being sugary or (too) pop. Darlia are for sure among the most exciting new bands to come from the UK these days – thinking of Wolf Alice, Catfish and the Bottlemen or Georgia here!

Probably my favorite track on Petals would be Dear Diary and the video for it is part band video and part a tiny bit spooky. It’s pretty cool either way and the song has insane hit potential:

Come to think of it, the bit heavier Stars Are Aligned is equally cool and catchy, and I like the video even more. Have a look: